A 22-year-old who never wants children has alleged that her gynecologist denied her request to get her tubes tied because of her age and suggested she try an IUD instead.

Olivia, a student from Massachusetts, went viral last week after she recreated her conversation with her gynecologist about tubal litigation, a surgical procedure for female sterilization.

‘Hi, Mrs. Gynecologist! My name is Olivia. I never want children. I’ve had this made up in my mind since I was old enough to think of the concept. Can I please have my tubes tied?’ she said at the start of the TikTok video.

Olivia, a student from Massachusetts, went viral last week after she recreated the conversation she had with her gynecologist about female sterilization 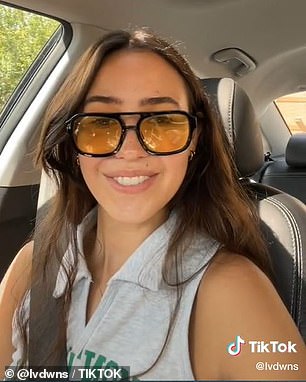 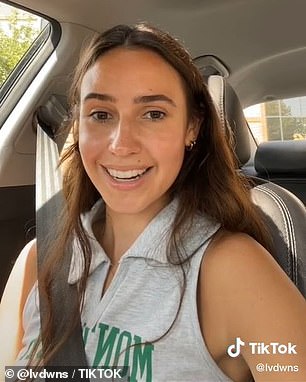 Olivia said she told her gynecologist that she has known from an early age that she doesn’t want children, but she wasn’t taken seriously 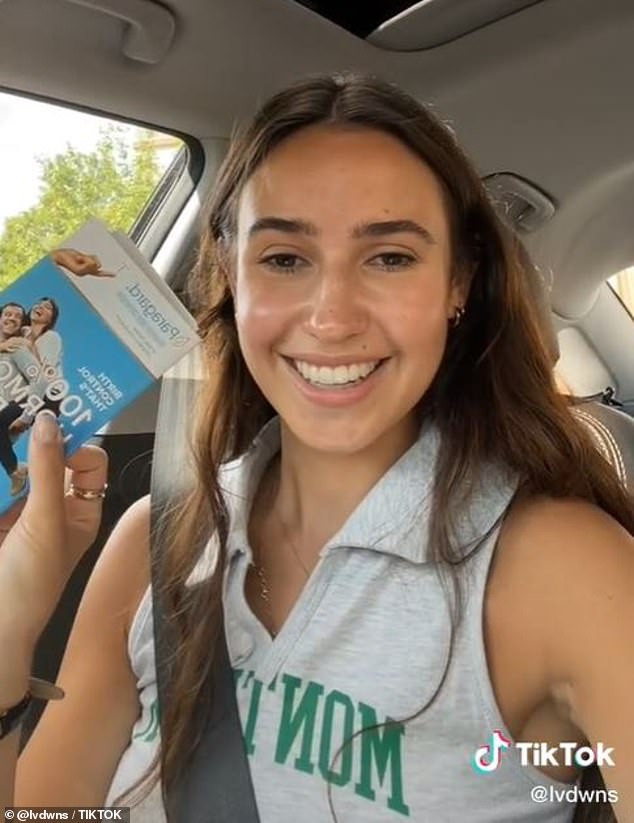 She claimed her doctor suggested she try an IUD instead, telling her: ‘You might meet Mr. Right and change your mind’

‘No,’ she responded as her gynecologist. ‘It’s permanent.’

‘Well, no. You might meet Mr. Right and change your mind,’ the gynecologist argued.

Olivia once again insisted that she doesn’t want children, saying: ‘It’s not my plan. It’s not in my five-year plan, it’s not in my ten-year plan, my fifty-year plan. I don’t want that.’

‘Yeah, but you might change your mind, and it’s permanent, so here’s a brochure for an IUD,’ the gynecologist offered. 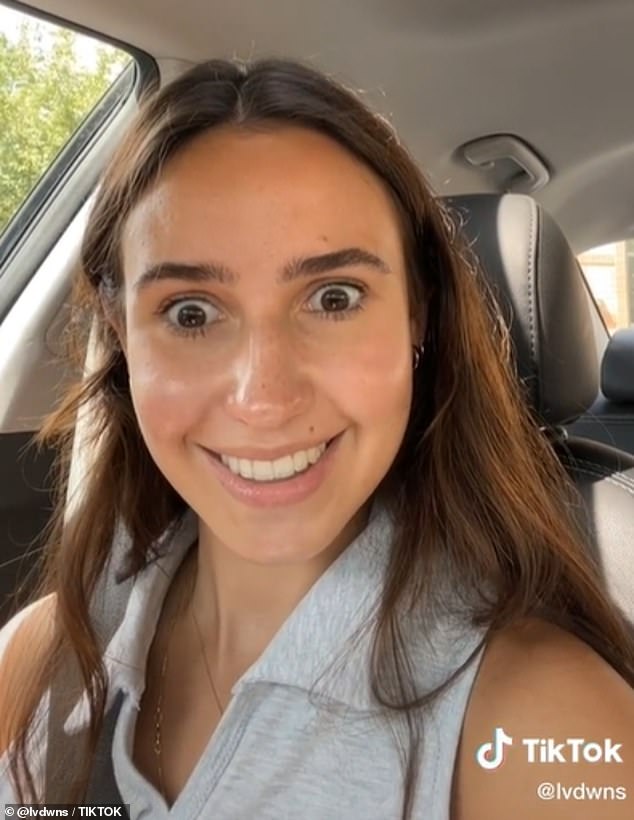 Olivia’s video has been viewed 1.9 million times and has received thousands of comments, many of which were from people who were outraged on her behalf

Olivia then held up a brochure for an IUD (short for intrauterine device) that her doctor allegedly gave to her during her appointment.

‘It has the same efficacy rate,’ her gynecologist said of the birth control option. ‘We put it in your universe and you bleed and cramp for three months.’

‘No. No, thank you,’ Olivia said after making a face.

In the caption, she wrote: ‘Got the death sentence today.’

Tubal ligation or ‘getting your tubes tied’ involves the fallopian tubes being either cut, tied, clamped, banded, or sealed off with an electric current to permanently prevent pregnancy. 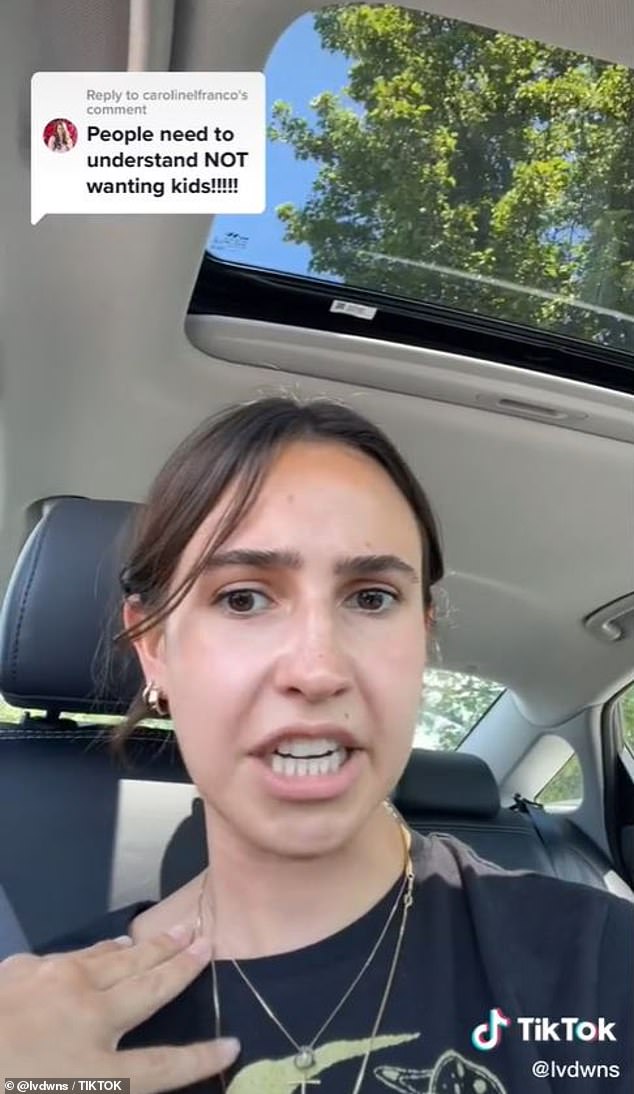 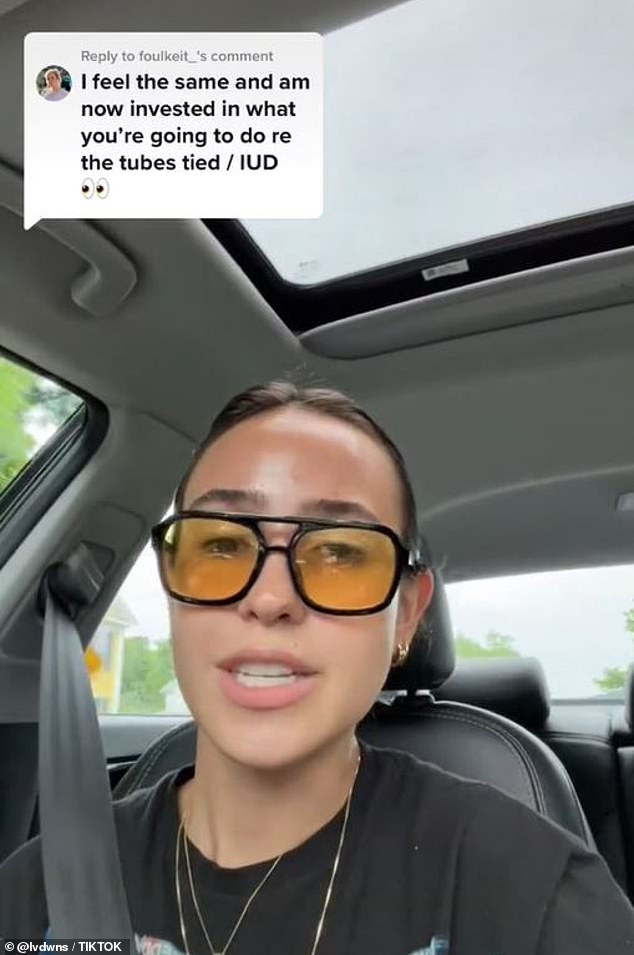 ‘I can tell you I’m definitely not getting an IUD. That’s for damn sure,’ she said, adding that she isn’t currently sexually active but thinking about the future

The American College of Obstetricians and Gynecologists (ACOG) states people should not be refused tubal ligation just because they are young and childless.

According to the ACOG’s 2020 guidance on the procedure, ‘respect for an individual woman’s reproductive autonomy should be the primary concern guiding sterilization provision and policy.’

Olivia’s video has been viewed more than 1.9 million times and has received thousands of comments, many of which were from people who were outraged on her behalf.

‘How do you just leave after this?? I can’t imagine a doctor denying my request just because they said so???’ one person asked. ‘It hurts my brain, please keep pushing it!’

‘People need to understand NOT wanting kids!!!!!’ someone else insisted, while another noted: ‘Mr. Right is someone who also doesn’t want kids how hard is that to understand.’ 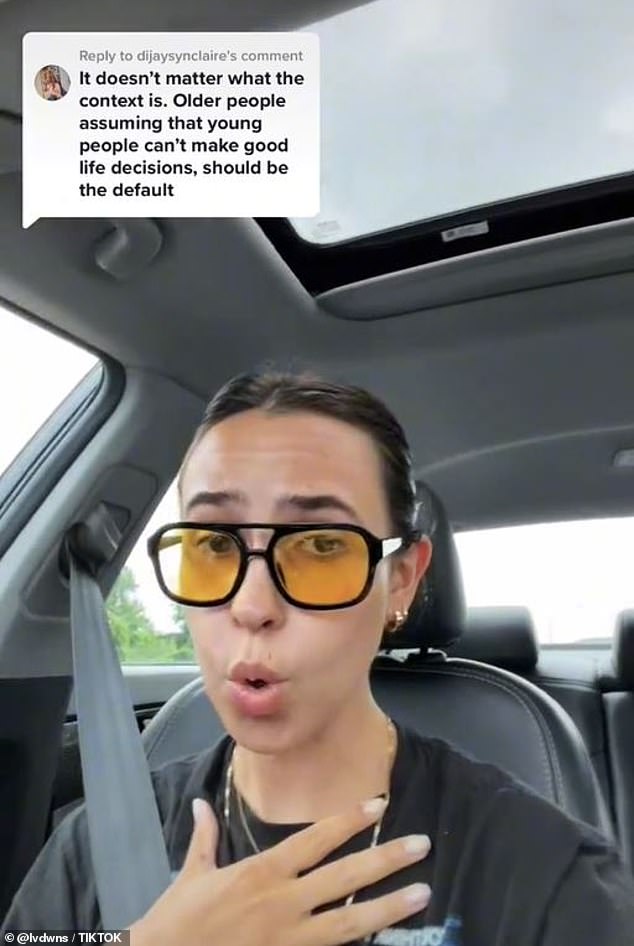 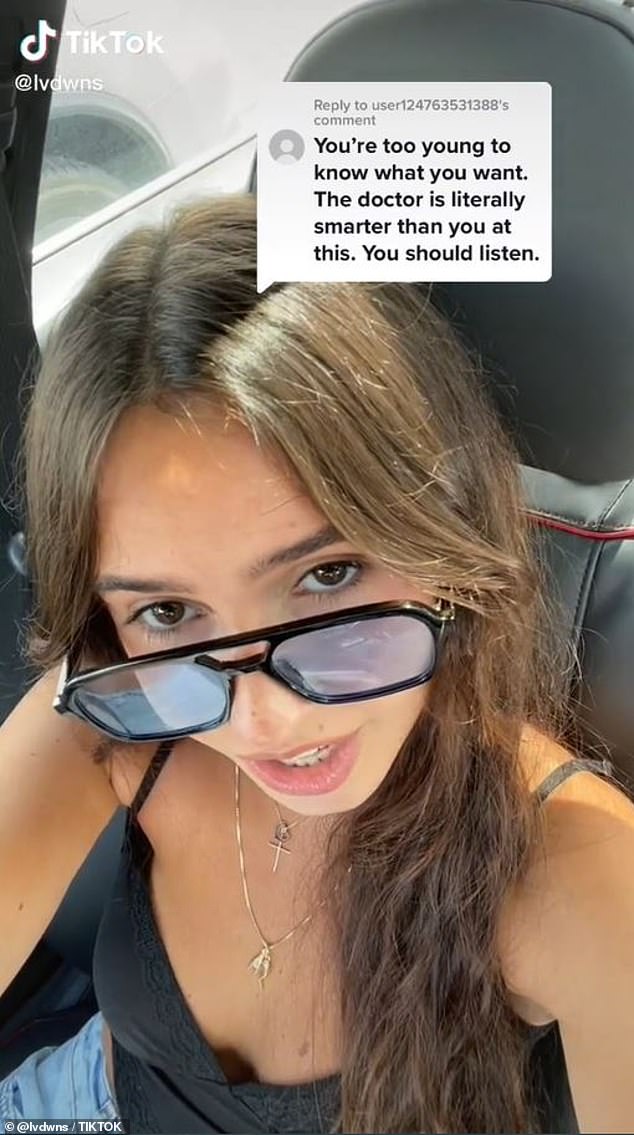 As for the commenters who sided with her doctor and claimed she might regret it one day, she argued that she could always adopt a child if that were to happen

Olivia further elaborated on her decision to not have children while responding to viewers’ comments in a series of follow-up videos.

She explained in one clip that has known since she was about three years old that she doesn’t want to have children, but older women often get offended when they hear her say that.

Olivia imitated how they insist she will change her mind when the right person comes along, totally missing the point.

‘Babe, it could be Harry Styles, and I would still refuse,’ she stated. ‘I don’t want a child. I really don’t want one. It’s just not for me.’

In another, Olivia shared that she is not currently sexually active, but she wants to make sure that she won’t get pregnant in the future. 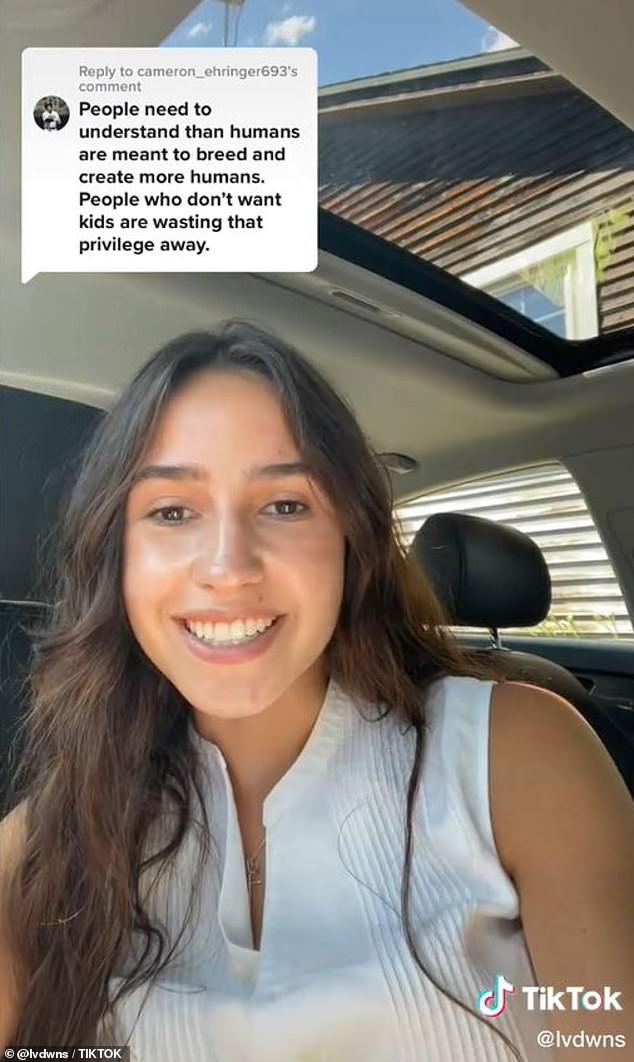 Olivia also clapped back at the number of men who weighed in on her decision, including a guy who told her that ‘humans are meant to breed’ 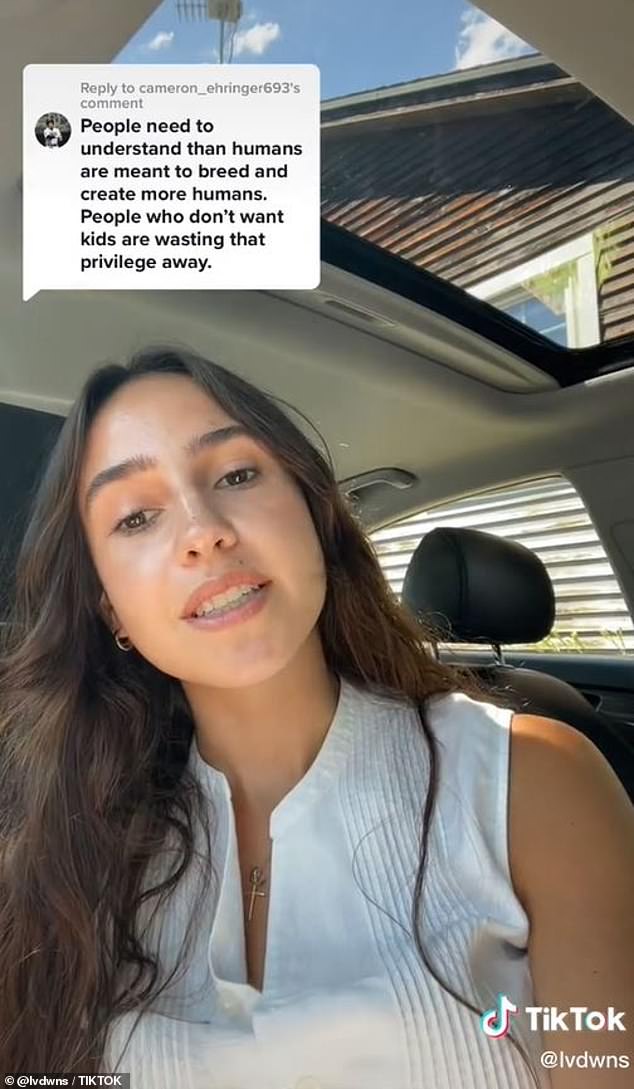 ‘I don’t go to the grocery store clerk to do my taxes, and I’m not gonna ask a man what I should do with my fallopian tubes,’ she said

‘I can tell you I’m definitely not getting an IUD. That’s for damn sure,’ she said. ‘Also I am literally like celibate. Like no one wants to f**k me. All I do is stay home and do homework and watch Twitch. So, it’s not like I’m not really getting laid.

‘I just kind of went in for a check-up and asked because I don’t want kids. When I do start f**king I don’t want to be at risk, you know?’

Olivia added that her future partner will have to get a vasectomy, which men seem more likely to get approved for at a young age.

‘I guess we’ll just cross that bridge when we get there,’ she said. ‘Whatever boo I end up with, I guess he will just have to get a vasectomy.

WHAT IS TUBAL LIGATION?

Tubal ligation, also known as ‘getting your tubes tied,’ is a surgical procedure for female sterilization in which the fallopian tubes are cut, tied or blocked.

Most tubal ligation surgeries cannot be reversed. An attempt to reverse the procedure calls for major surgery, and it doesn’t always work.

The procedure does not protect against sexually transmitted infections.

Risks include improper healing or infection, continued pelvic or abdominal pain, and damage to the bowel, bladder, or major blood vessels.

A failure of the procedure can also result in an unwanted pregnancy.

Tubal ligation may also decrease a person’s risk of ovarian cancer, especially if the fallopian tubes are removed.

‘Cause, apparently, you can get one with a snap of a finger because they’re reversible. But, yeah, until then, we’re just gonna remain celibate, I guess.’

As for the commenters who sided with her doctor and claimed she might regret it one day, she argued that she could always adopt a child if that were to happen.

‘Isn’t it worse if I have a kid, and then I regret having it, and I treat it like s**t for the rest of its life, which clearly a lot of your parents did,’ she said.

‘I’d much rather regret my decision and end up adopting one of the millions of kids in our s****y foster care system than to have one, regret having it, not raise it right, and then have it say stupid s**t like this publicly on the internet.’

Olivia also clapped back at the number of men who weighed in on her decision, including a guy who told her that ‘humans are meant to breed.’

‘I’m thinking a lot of men in this comment section are a little confused. Me, one person, not wanting to have children is not going to cause extinction of the human race, believe it or not,’ she said.

‘There’s a lot of people having kids every moment of every day, probably a lot of people who shouldn’t be. So, we’re gonna be fine. Look outside, babe, there’s way too many people already.’

Olivia stressed that ‘women are more than just incubators,’ and she has her own life and career that she wants to pursue.

‘Having a child would throw a wrench into that,’ she explained. ‘I also don’t want to ravage my body with pregnancy just to have a little rascal running around annoying me that I don’t want to take care of, OK?’

She noted that a man would also be the last person she would take advice from when it comes to her body and her decision to not have children.

‘I don’t go to the grocery store clerk to do my taxes, and I’m not gonna ask a man what I should do with my fallopian tubes,’ she clapped back.

Olivia shared in a more recent video that she knew her doctor was going to tell her no the minute she brought it up, but she wants it on file that she has been asking to be sterilized.

‘Yeah, I am young, but if I’m old enough to have a kid, which is a very permanent decision, which comes with a lot of responsibility, I probably am old enough to know that I don’t want a damn kid ever,’ she added.

The jobs with inflation-busting pay rises

Study: Medicare could waste up to $605M on Alzheimer’s…