A UP Diliman graduate explored Blackpink’s impact in this thesis

Oftentimes, we like making our own worlds with our idols.

There’s comfort in plastering photos of our favorite groups on our chipped bedroom wall, creating Twitter seryes that reimagine our biases, and joining communities that make us feel like they know us. Because of this, putting them under a lens of scrutiny is another level in the fandom book. But a Blink did just that—and in his thesis manuscript to boot.

In his third year of college, University of the Philippines Diliman speech communication major Cayl Andrew Franco started getting caught under Blackpink’s spell. “I was enticed by their music and began to research more about them, a few weeks after ‘DDU DU DDU DU’ came out,” he says. “I immediately fell in love with the group because they reminded me of 2NE1’s charisma, the group, along with H.O.T. and Girls’ Generation, that brought me into the world of K-pop.”

Soon enough, stanning Lisa, Jennie, Rosé, and Jisoo evolved into something bigger than a serotonin boost for Cayl. Apart from their portrayal of a “fierce girl image, coming from their girl crush concept,” the supergroup became his thesis’ muse for their game-changing popularity. Thus, the birth of “Blackpink Is the Revolution?: A Case Study on the Rhetorical Power of Blackpink as a Popular Culture Icon” in 2021 as his (last) ticket to graduation.

Although some people weren’t initially on board with the idea, he emphasized that he wanted to dissect their impact intertwined with wide-scale issues, like gender and media.

“As someone who was part of a cultural activist organization, we were able to find out how culture plays a big role in how we can shape our society, alongside its political, and economic structure,” he explains. “Given that there is fame in K-pop, which was analyzed as a petit-bourgeois interest, I wanted to talk about in my study the advantage of using this popular culture phenomenon in arousing, organizing, and mobilizing the fellow youth in forwarding genuine change in Philippine society.”

In this interview, we talk to the now-23-year-old public relations associate about his experience in completing the sacred chapters of his testament to stanhood (and beyond).

Aside from unpacking BLACKPINK as the current icons that they are, you also weaved together themes like representation and exploitation of women in media, even in the Philippine context. Can you tell us more about this?

It was noted in the literature review of my study that there were various frames of representation of women from pre-Hispanic times up to the contemporary period—and they were predominantly negative. The ideological state apparatuses, as well as standards on how women were viewed in society, were exposed. These talk about women receiving [lower wages] than men despite doing equal or more workload, the division of labor between genders, and other gender roles. I saw how the socio-economic conditions of those times led to how women are being identified in different industries in Philippine society such as media.

In your study, you utilized Sonja K. Foss’ Visual Rhetoric Theory and Laura Mulvey’s Visual Pleasure Theory in dissecting a few of their biggest music videos. What points piqued your interest the most in this process?

Interestingly, upon dissecting three of Blackpink’s music videos showing them in different eras, there have been minor details that when analyzed, actually mean so much.

For example, there have been frames in music videos with shots of the members’ beautiful faces that can actually show how powerful women can be towards having a say in their own body or how they want to present themselves. Using Mulvey’s Visual Pleasure Theory, I was able to pull images that show narcissism, fetishism, and voyeurism.

Voyeurism is identified as instances where people engage in sexual, sordid, or scandalous acts without the other’s knowledge; fetishism means getting pleasure from openly looking at an object that is satisfying in itself, and narcissism is when the artifact draws the viewer to want to be them. It occurs when the viewers recognize their own self and their likenesses in the images, or if they imagine themselves mirroring these images at some point.

Through embedding significant beauty shots in different parts of their music videos, Blackpink continues to set beauty standards for other people, hence employing narcissism as people continue to view them as someone they want to be like. This further entices the audience to see them as objects of power and not [figures for] objectification.

We often see music videos as they are but tend to overlook the meaning behind the different frames in them. As media consumers, we have the power to analyze and dissect all the content we consume. From fact-checking articles to unraveling “easter eggs” in visual content, we have the responsibility of providing ourselves with fruitful information and learnings that can help us become better more and more each day.

You were able to talk to 17 young Filipino BLINKs for your study. How was this experience, and what’s the most memorable thing you’ve learned from them?

All the Blinks who were interviewed came from different backgrounds: senior high school students, university students both from UP and outside the university, a member of a prominent human rights’ organization, and people already working in the private sector. They became Blinks in different eras of Blackpink, which offered more interpretations of how and why Blackpink gained popularity, and how it meant to each and every one of them.

The thing about being a Blink or a K-pop fan is that the level of one’s admiration for the idols is not determined by the number of merch you have from them, but rather how they continue to impact one’s mundane lives. Not everyone has the capacity to buy merch or go to their concerts, but everyone can see how invested they are in their content while they see these idols as an inspiration for them to reach their dreams.

K-pop stans know the rigorous training process that these idols go through even if they don’t have any assurance that they would debut in the future. The younger participants in my thesis see this hard work as an inspiration to keep working hard and persevere to achieve success. It’s not about the number of photocards you have or concerts you’ve been to, but it’s more about how you continue to see them as role models to be a better version of yourself, not just for you but for everyone else around you.

Can you share with us other highlights of your thesis you feel particularly very drawn to?

The findings of my thesis, especially the part showing its impact on society really struck me, as I was able to prove my point on how we can continue to see the K-pop phenomenon as a way to tackle certain issues such as women and gender empowerment, Asian representation, and collective action.

This proves how their rhetorical power is being manifested by the audience—reinforcing them as a popular culture icon in instances wherein Blackpink’s content continues to make a change and influence other people.

Blackpink continues to be role models for genuine change ; we can take [as an] example when Blackpink was appointed as one of the ambassadors for the United Nations Climate Change conference in February  2021. This prompted some Blinks worldwide to create campaigns on climate change awareness. Moreover in the local scene, Kabataan Partylist used “DDU-DU-DDU-DU” as one of their campaign jingles in the 2019 national elections, incorporating their advocacies in the lyrics to the tune of that song.

Blinks’ presence continues to make Blackpink a part of popular culture, giving them the power to be catalysts of change in society. They continue to bring ideologies that shape people’s minds and influence them on how to live their everyday lives.

Blackpink promotes feminism in various ways, showing power and dominance through the different themes revealed in my study. On top of this, fans have utilized their strong connections within their fanbase to generate campaigns that aid in social change. Filipino Blinks have done various donation drives and fundraising activities to help fellow countrymen affected [by] calamities that have passed. 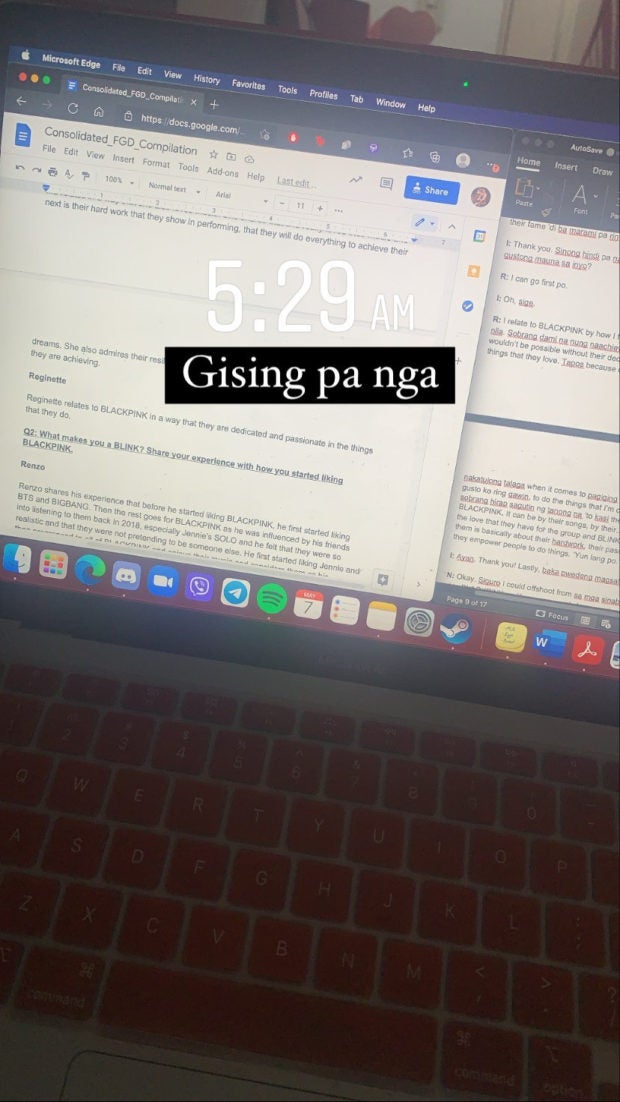 For some, one’s stan life getting combined with a make-or-break academic requirement might feel like an out-of-the-comfort-zone choice. For you, what’s the best thing about doing a study on something you love?

Throughout countless papers I’ve done during my time as an undergraduate, my thesis was one of the works I wrote which gave me a sense of fulfillment, not just because it is my final requirement, but [also] because of how it gave me the opportunity to prove that my interest is relevant and not just a hobby.

Though it was not an easy road for me, the goal of wanting to show everyone the capabilities of K-pop idols to influence other people for the betterment of society was my main motivation to keep this going.

We K-pop stans know that our favorite idols come and go, and with the time we have with them throughout their contract, we want to make the most of showing people how they are game-changers not just in music, but also in the society we are living in. We see our idols as role models as we continue to reach our own dreams. 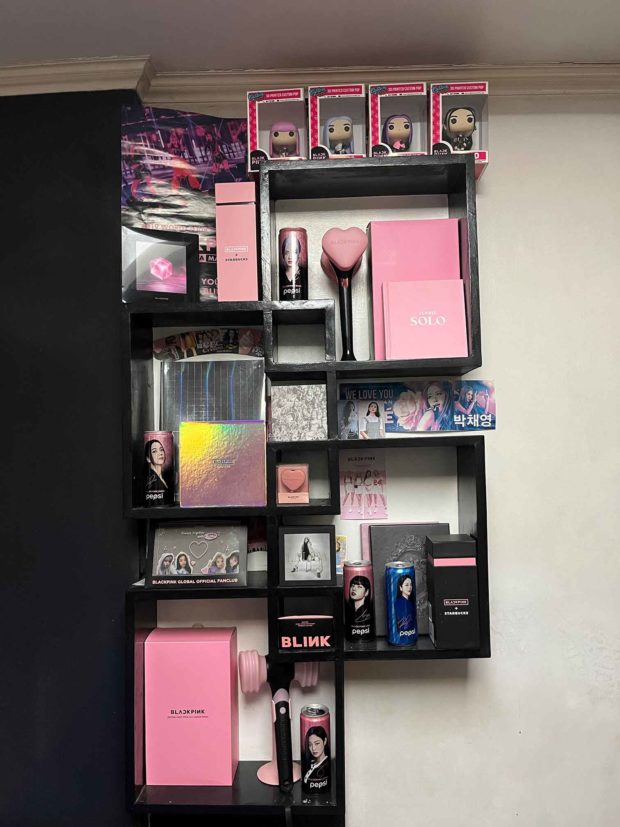 Who knows, someone reading this interview might finally pursue a thesis topic on their own fandoms. I’ll ask this for them: How was the experience presenting this to your thesis adviser and panelists?

Upon presenting this topic to my adviser, she was very excited about this as my study was one of the first rhetorical studies about a K-pop group, which, actually, made it difficult for me as there were limited studies about this phenomenon. Throughout the process of writing, there were ups and downs but with the help of my thesis adviser, the study became a success. I was able to raise awareness on the presentation and representation of women in K-pop music videos, especially Blackpink’s.

I aim to make people understand the shared experiences of fandoms altogether as they watch their favorite K-idols’ performances and music videos. This way, we are able to attract more fans as I prove the relevance of this subculture in society. Hopefully, it provided a new perspective on raising awareness on social issues using K-pop.

Now, do your lifetime wishes include Lisa, Jennie, Rosé, and Jisoo reading your thesis?

While this dream has always been there, I also want to be an inspiration for the youth to continue fighting for what they love and what is right. Using our shared experiences to come together and fight for a good cause is what’s important, and this is attainable through our love for K-pop. As a wise philosopher once said, “Radikal ang magmahal.”

This article was originally published in Scout.

Get the latest lifestyle news delivered to your inbox

Supply won’t save us | Financial Times

Opinion | ‘Abortion Is Just the Beginning’: Six Experts on…

Companies forced to weigh in on privacy, health care

US Supreme Court ruling triggers rush of new restrictions on…

BET Awards: How to watch, what to expect

A riverside walk to a great pub: the John O’Gaunt Inn,…