Tropical Storm Bonnie has put an unusual stamp in the weather history books following its formation in the southwestern Caribbean Sea, passage through Central America and emergence into the East Pacific Ocean — all within the span of 24 hours. The second named storm of the Atlantic season is now on track to become the eastern Pacific Ocean’s next hurricane.

Bonnie was a 50-mph tropical storm at the time of landfall along the Nicaragua-Costa Rica border Friday night, with flooding rainfall being the primary risk to lives and property from the storm in these countries. Only two named storms on record have made landfall in Costa Rica, in 1887 and 1973. The only landfall farther south was Tropical Storm Martha in 1969, which is the only recorded landfall in the country of Panama. 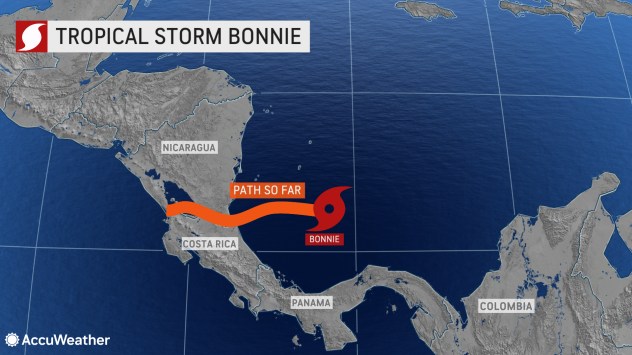 By 10 a.m. CDT Saturday, Bonnie had moved offshore of Nicaragua and was charting a course through the waters of the East Pacific. Since the storm’s circulation remained in tact and did not fall apart over land, the National Hurricane Center continued to dub the storm Bonnie, as opposed to giving it the next name on the 2022 East Pacific hurricane season’s list (Darby). This is the first crossover storm since November 2016 when Hurricane Otto’s circulation remained intact as it traveled over Costa Rica and emerged into the Eastern Pacific as a tropical storm.

“There have been close to 20 officially recognized crossover storms — meaning they tracked in both the Eastern Pacific and the Atlantic basins. Another 20 or so storms may have crossed over but were never officially recognized as such,” AccuWeather Senior Weather Editor Jesse Ferrell said.

There are no coastal watches or warnings in effect.

Bonnie ran out of real estate to strengthen into a hurricane on the Atlantic side before moving inland in Central America. Forecasters say the opposite will be true on the East Pacific side, where the storm is expected to roughly parallel the southern coast of Mexico, as well as El Salvador and Guatemala next week. 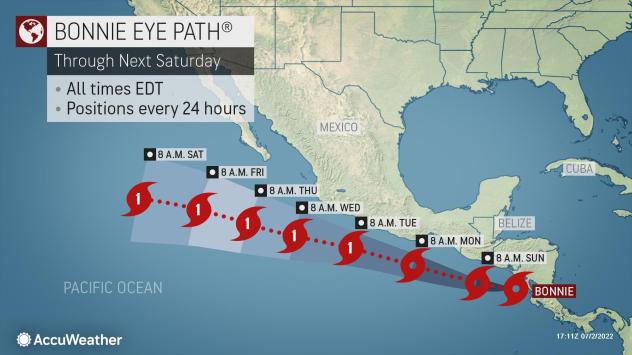 “Bonnie is expected to gain wind intensity and become a hurricane next week as it moves over the warm ocean waters,” AccuWeather Senior Meteorologist Dan Pydynowski said.

If Tropical Storm Bonnie intensifies to hurricane-force after it crosses over Central America, which AccuWeather forecasters expect it to do, it will count as a hurricane for the Eastern Pacific basin, according to AccuWeather Chief Meteorologist Jonathan Porter, citing the World Meteorological Organization.

The East Pacific basin has already had two hurricanes roar to life south of Mexico this season: Agatha, which made landfall in Oaxaca, and Blas, which stayed offshore. 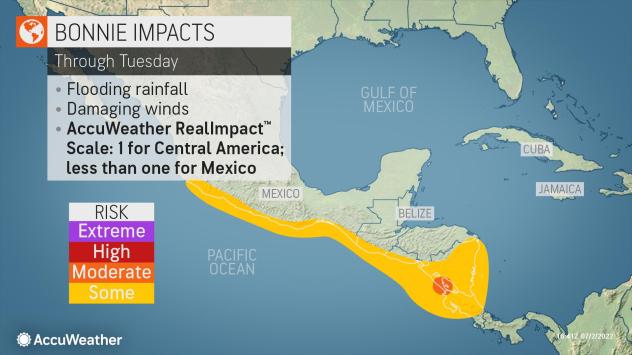 “The southwestern coast of Mexico can expect heavy rainfall, locally gusty winds and strong rip currents as the storm tracks south of the country,” Pydynowski said.

As of Saturday morning, Bonnie continues to have maximum sustained winds of 40 mph, with gusts going higher than that. The gradual strengthening of the storm in the passage to the Eastern Pacific is forecasted to continue through Tuesday, with tropical storm force winds extending outward up to 70 miles from the center.

From its origins, the storm has been anything but a typical tropical cyclone.

AccuWeather meteorologists began tracking the system as a tropical rainstorm during the last weekend of June as it swirled over 1,000 miles east of the Lesser Antilles.

When the tropical rainstorm, designated by the National Hurricane Center as Potential Tropical Cyclone Two on Monday afternoon, June 27, formed at 8.6 latitude north, about 250 miles north of French New Guinea, it became one of the southernmost tropical cyclones ever tracked.

“According to the NOAA Hurricane Historical Tracks Archive, the only storm that formed farther south was Tropical Storm Bret that formed as tropical depression at a mere 7.5 degrees north latitude on June 18, 2017, then made landfall as a tropical storm in southern Trinidad on June 20 of that year,” Ferrell said. 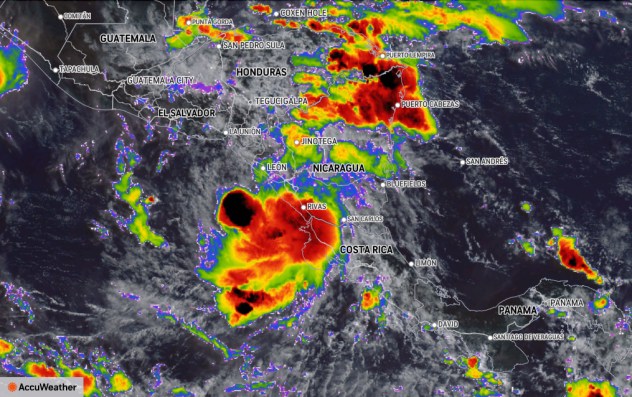 The rainstorm would then go on to make landfall in Trinidad and Tobago and then scrape the continent of South America, tracking over the Paraguaná Peninsula, a small peninsula located in the northern part of Falcón State, Venezuela. That’s something that has only been recorded three times, with only another two tropical storms tracking even farther south in the country.

On Wednesday, the government of Venezuela closed schools and opened shelters while also limiting air and ground transportation due to the threat of heavy rain from future Bonnie, The Associated Press reported.

The island of Curacao ordered businesses to close and imposed a curfew that began late Wednesday morning, the AP reported. Power outages were reported in Trinidad and Tobago due to the storm’s passage earlier in the week.

lsewhere in the Atlantic basin, AccuWeather meteorologists are tracking Tropical Depression Colin, which quickly formed near the South Carolina coast on Saturday morning, July 2. The storm may cause washouts for the Fourth of July festivities this weekend, but should exit the coast in time for the holiday itself.

UK has least reliable year for rail travel since records…

50 Cent and Floyd Mayweather Appear to End Their Decade-Long…

Check your medicine cabinet! How to find recalled drugs

Ryan Giggs threatened to headbutt me next, claims…