By Harry Wise For This Is Money

The US-focused business, formerly known as Wolseley, said it had entered into an agreement with brokers from Morgan Stanley to acquire up to £375million of its shares from now until no later than 10 October.

It added that it was set to request a further share repurchase scheme when its annual general meeting is held either in November or December.

Buyback: The US-focused business, formerly known as Wolseley, said it had entered into an agreement with brokers from Morgan Stanley to acquire up to £375million of its shares

Last week, the firm revealed that it had bought just over $500million of shares in the three months to the end of April, taking the amount it has acquired during the current financial year to $918million.

Ferguson, whose corporate headquarters are based in Wokingham, had initially planned on a $1billion buyback programme before hiking the amount by another $1billion as a surge in sales continued to strengthen its financial position.

Loosening lockdown restrictions over the past year have led to a strong rebound in housebuilding activity in the US, where the firm earns the overwhelming majority of its revenues.

Demand for the group’s products from non-residential customers has also grown, helping drive its overall net sales up by 23.1 per cent year-on-year to $7.28billion in the most recent quarter.

Combined with modest increases in costs that helped the growth in earnings outstrip revenues, the company’s total operating profit jumped by over a third from $520million to $712million.

Thanks to robust performance and expectations of healthy short-term demand, the group raised its operating earnings forecast for the year to between $2.85billion and $2.95billion. 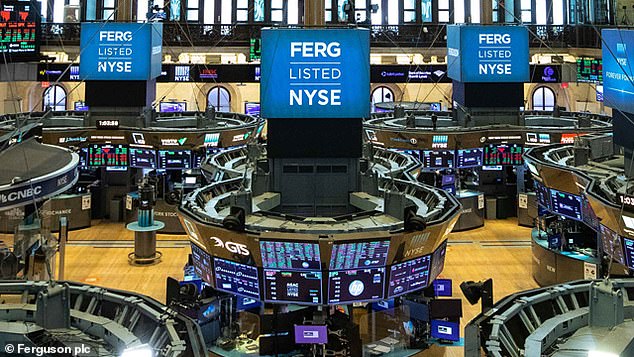 Move to America: Last month, Ferguson lost its place on London’s blue-chip FTSE 100 Index when it transferred its primary listing to the New York Stock Exchange

Commenting on the outlook, Ferguson chief executive Kevin Murphy said: ‘While we are mindful of broader macroeconomic headwinds, our balanced business mix, agile business model and strong balance sheet position us well for the future.’

Founded as a sheep shearing machine manufacturer in the late 19th century by Frederick York Wolseley, Ferguson eventually moved into supplying building, heating and plumbing products during the post-war era.

Four decades ago, the firm completed its first ever overseas acquisition when it bought Ferguson Enterprises, which is now one of the largest distributors of heating, ventilation and air conditioning equipment in the US.

By the time the company decided to rebrand from Wolseley to Ferguson in 2017, the American division was responsible for around 90 per cent of total trading profit.

It kept using the Wolseley name in the UK and Canada before selling its British operations to hedge fund Clayton, Dubilier & Rice for about £308million early last year in order to focus on its US operations.

And just last month, the group lost its place on London’s blue-chip FTSE 100 Index when it transferred its primary listing to the New York Stock Exchange.

Ferguson plc shares were up 1.8 per cent at £88.86 during the late morning on Friday, although their value has fallen by around a third since the start of the year.

Boudoir Photography Is Booming Thanks to Pandemic Boredom

Socceroos to face Argentina in World Cup knockouts after…

EU crypto framework under scrutiny by policymakers after FTX…