Andrea Riseborough’s campaign efforts to snag herself a best actress nomination at this year’s Academy Awards was touted as a ‘Hail Mary.’

The 41-year-old British star of To Leslie even drew from her own bank account to spotlight the indie film after it flopped at the box office, Deadline reported.

At the time of writing, To Leslie has made only $27,322 in gross box-office earnings worldwide, according to IMDB.

So how did a little-seen movie about a West Texas alcoholic mother who seeks redemption years after squandering her lottery winnings while leaving behind a trail of destruction earn its star her first Oscar nomination for best actress? 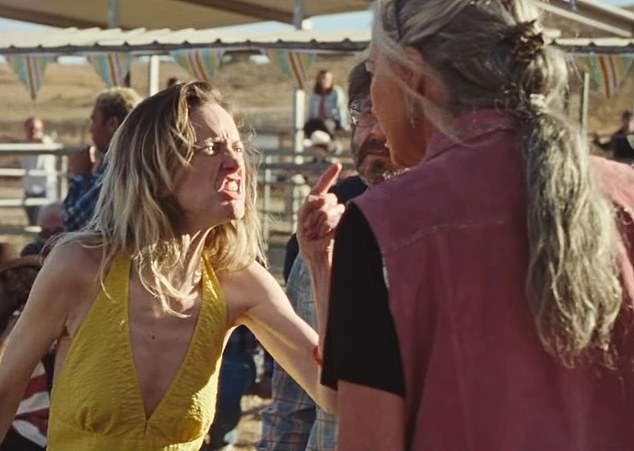 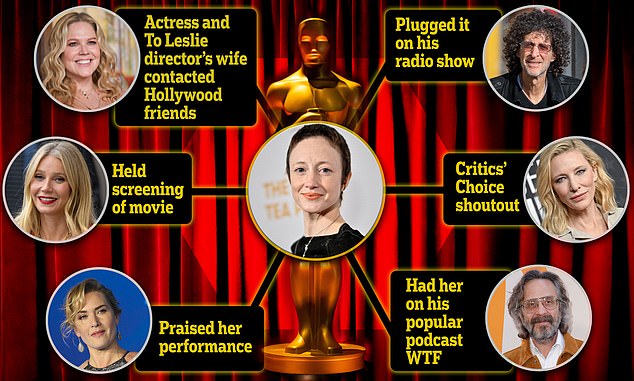 Deploying ‘guerilla’ tactics, Riseborough had help from some of Hollywood’s most powerful stars, starting off with actress Mary McCormack who also happens to be the wife of To Leslie director Michael Morris.

She spread the word to her celebrity friends to watch the movie and share their love of it after To Leslie’s distributor, Momentum Pictures, apparently ‘dropped the ball.’

One of the stars of To Leslie, comedian Marc Maron, made the accusation on his WTF podcast in January, saying: ‘The f***ing distributor dropped the ball on facilitating something that would bring a lot more attention to the movie.

‘And now this movie with a 100 per cent Rotten Tomatoes score that everyone should see [has] been hobbled by the people responsible for putting it out there.’

Andrea was a guest on his popular podcast when he made these comments.

The movie’s cred has continued to rise since Academy Award winner Charlize Theron first hosted a screening for the movie in November.

Even before this, Howard Stern, who was shown To Leslie by its director and his wife back in July, had been singing its praises on his SiriusXM show in October, Variety reported. 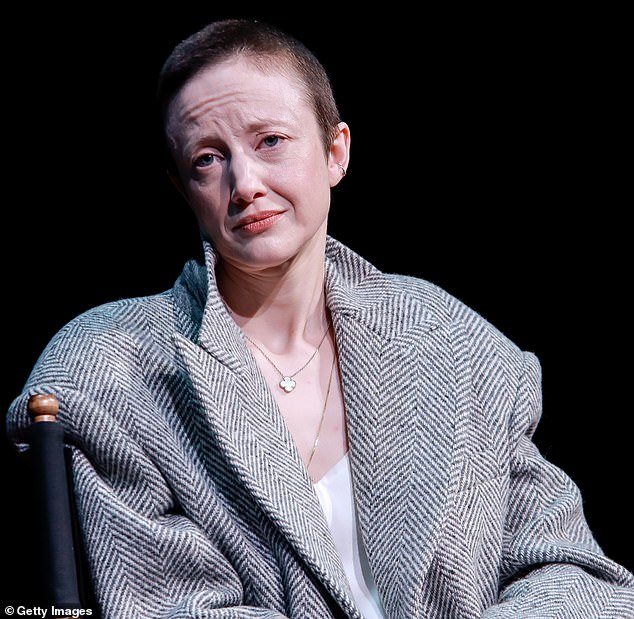 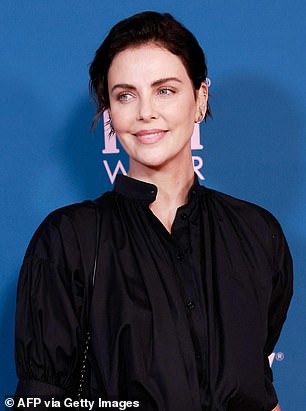 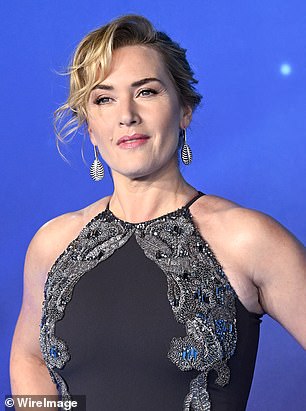 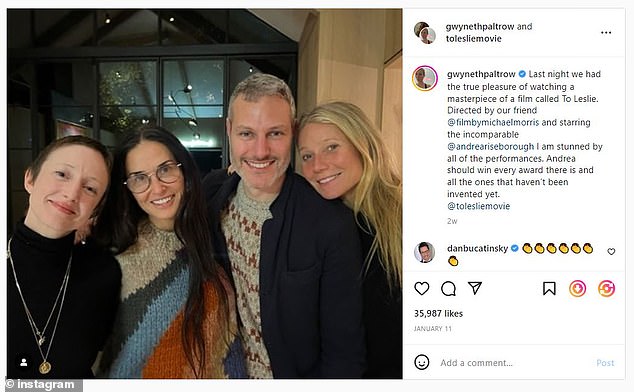 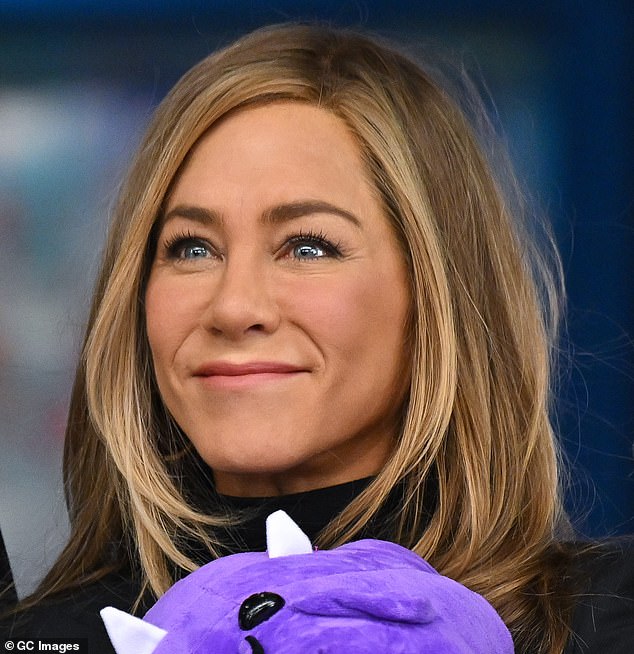 Using her star power, Jennifer Aniston also hosted a screening for To Leslie

After seeing the film, Norton wrote: ‘I don’t post a lot about films or actor performances… maybe I should more often. But for those interested in really great acting I’ll share that Andrea Riseborough’s portrayal in “To Leslie” just knocked me sideways. 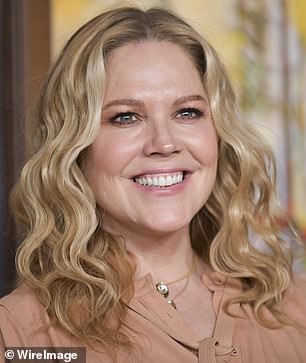 ‘It’s about the most fully committed, emotionally deep, physically harrowing performance I’ve seen in a while. Just raw & utterly devoid of performative BS.

‘It’s a tough but really elegant & compassionate film (by Michael Morris) where the emotion is really earned.

‘I happened to catch it and, wow, I was really staggered by the depth she reached. Very rare. Check it out.’

Following these events, Andrea and a team of publicists ‘started working the phones,’ and got their ducks in a row with a good base of support during the holidays at the end of 2022.

As the new year came, Hollywood powerhouse Gwyneth Paltrow played host to a January screening, declaring To Leslie a ‘masterpiece,’ just days before voting for Academy Award nominations was poised to begin.

‘Last night we had the true pleasure of watching a masterpiece of a film called To Leslie. Directed by our friend [Michael Morris] and starring the incomparable [Andrea Riseborough],’ the Iron Man actress wrote in a January 11 Instagram post. 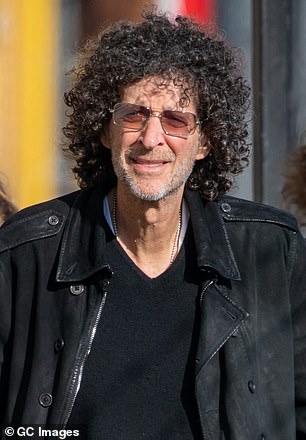 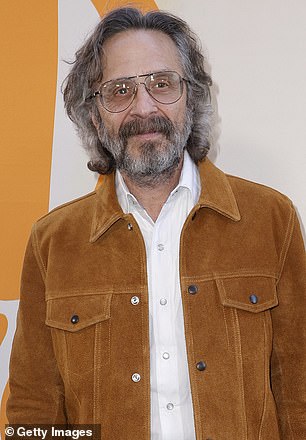 Howard Stern (left) plugged the movie on his radio show, while Marc Maron (right) did the same on his popular podcast, WTF

The actor tweeted about the movie, saying it ‘knocked [him] sideways’

‘I am stunned by all of the performances. Andrea should win every award there is and all the ones that haven’t been invented yet.’

‘It is extremely arbitrary considering how many extraordinary performances there have been by women [this year], not only in this room, but Andrea Riseborough and Tang Wei and Penélope Cruz. The list goes on and on and on,’ she said.

During a Q&A for the film, Hollywood success and host Kate Winslet praised Andrea’s performance.

‘This was so fantastic. I loved it. You should be up for everything, you should be winning everything,’ she told the To Leslie star who was appearing alongside the director during the session.

‘I think this is the greatest female performance on-screen I have ever seen in my life. And I love you, and congratulations.’

Despite all the backings of some of Hollywood’s most powerful actors and actresses, Andrea was surprised by her Academy Award nomination.

‘I’m astounded,’ she told Deadline on Tuesday when the nominations were announced. 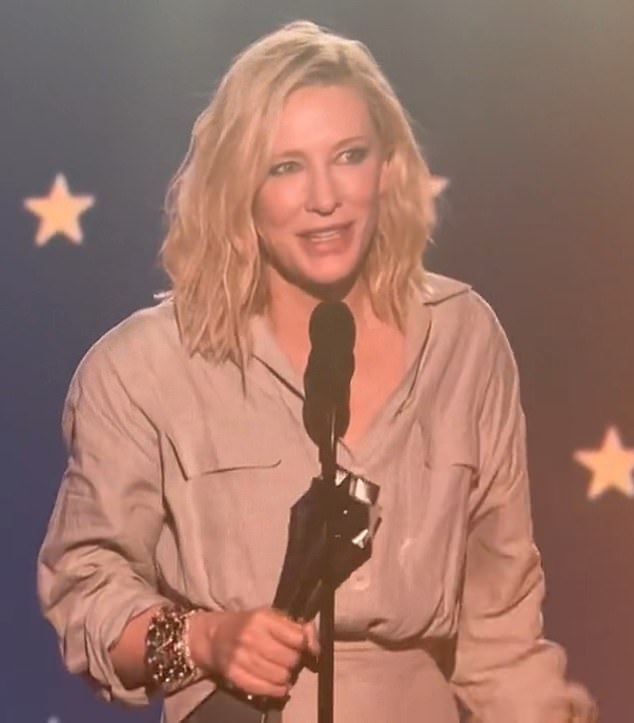 Cate Blanchett, who is also nominated for an Oscar, shouted out Andrea’s performance during her Best Actress acceptance speech at the Critics Choice Awards

‘It’s such an unexpected ray of light. It was so hard to believe it might ever happen because we really hadn’t been in the running for anything else. Even though we had a lot of support, the idea it might actually happen seemed so far away.’

Andrea is up against Tár’s Cate Blanchett, Blonde’s Ana de Armas, The Fabelmans’ Michelle Williams and Everything Everywhere All At Once’s Michelle Yeoh for the best actress trophy.

But her nomination has sparked some controversy with social media users noting that her inclusion may have pushed The Woman King’s Viola Davis and Till’s Danielle Deadwyler out of the running.

Despite the industry facing a reckoning after the #OscarsSoWhite in years past, none of this year’s best actress nominees are black.

‘The way Andrea Riseborough can just start campaigning in January with all her powerful friends and still get a nomination, while incredible performances by Viola Davis and Danielle Deadwyler were snubbed… rich white women really have it so easy,’ one person wrote.

‘Yep. I had a feeling that the groundswell for Andrea Riseborough would kick out Deadwyler and Viola Davis. Which isn’t an anti-Risenorough tweet. But Black women quite literally never get that campaign. And are always harmed,’ another added.

Song Joong-ki and Katy Louise Saunders are married and…

President Biden will end COVID emergencies on May 11