Your Fitbit could end one of the biggest arguments couples have in bed—whether one of them is snoring like a chainsaw.

The company has confirmed that its Sense and Versa 3 models are being rolled out with a microphone-powered ‘Snore & Noise Detect’ feature that indicates if the wearer or their bedmate is sawing logs.

The feature, first reported by 9to5Google, requires users to activate it on their device’s ‘Sleep’ page.

It will then record data on ‘snore-specific noises’ as well as the overall noise level in the room.

Once your Fitbit detects you’re in La La Land, its microphone will ‘sample, measure and collect information about the noise in your environment … ‘every few seconds.’

Detecting snoring could be the first step to addressing serious health issues like sleep apnea—and possibly saving your marriage.

However, privacy advocates are unsure of the features motive and sees it as another revenue stream for Fitbit, which could sell data to advertisers.

‘Habitual snoring is a nuisance to bed partners,’ Stanford sleep surgeon Stanley Yung Liu said in 2016. ‘Many patients seek care because they’ve been asked to leave the bedroom and sleep on the living-room couch.’

But more than sacking their love lives, Lui said, ‘asleep patients are often unaware of breathing interruptions that have serious health risks.’

Snoring can be linked to daytime complaints of sleepiness, headaches, or mood disturbances like anxiety, depression and irritability.

It can also be a warning sign of obstructive sleep apnea (OSA), according to the Mayo Clinic, a condition when the throat muscles relax and block your airway during sleep. 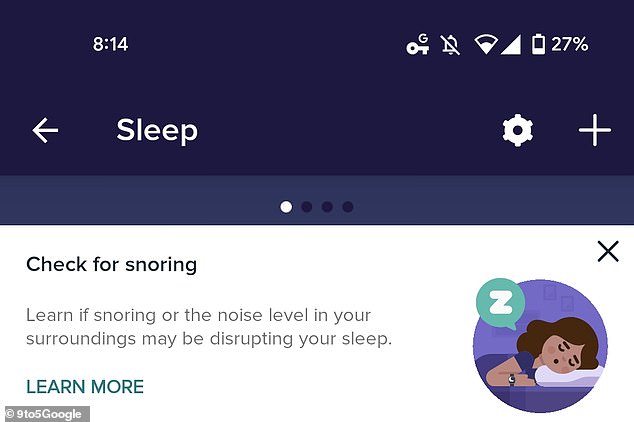 Snoring can be linked to daytime complaints of sleepiness, headaches, and mood disturbances like anxiety, depression and irritability. It can also be a warning sign of obstructive sleep apnea, a condition when the throat muscles relax and block the airway

The snore monitor feature does gobble up battery life, Fitbit warns, recommending devices be charged at least 40 percent before you go to bed.

Both the Fitbit Sense and Versa 3 were released at the end of September 2020.

Besides one of those smartwatches, to use the Snore & Noise Detect feature wearer will need a $10 monthly premium Fitbit subscription.

Not everyone is impressed with the offering, though.

‘The narrow hardware and service requirements dampen the usefulness of noise detection,’ writes engadget’s J. Fingus. ‘All the same, it could be helpful if you’re already invested in the Fitbit ecosystem. It also gives Fitbit a potential advantage over rivals whose sleep tracking seldom accounts for noise.’ 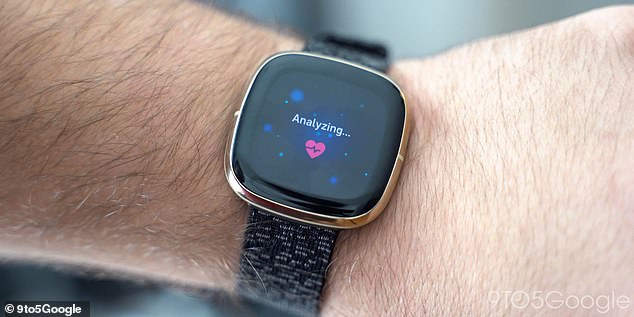 Google, which acquired Fitbit in January for roughly $2.1 billion, has been investing more heavily into bedtime technology: in March, the company unveiled a new Nest Hub assistant with a built-in sleep monitor that analyzes snoring and coughing frequency,.

The seven-inch smart screen, which retails for $100 relies on a new chip Google calls Soli, which uses radar to detect motion—including the depth of a person’s breathing.

The Nest Hub generates weekly sleep reports with breakdowns on the length and quality of sleep, how frequently the user gets up at night, along with tips developed in consultation with the American Academy of Sleep Medicine.

With both the Fitbit and Nest Hub updates, privacy advocates worry a multi-billion-dollar corporation having access to our nighttime data is a risky proposition, especially given Google’s history of collecting personal details such as location, habits and interests to target online advertising.

It also underscores Google’s obvious intent to extend its tentacles into new areas of people’s lives in its relentless quest to make more money, according to Jeff Chester, executive director of the Center for Digital Democracy, a consumer and privacy rights group.

‘Google’s goal is to monetize every cell of your body,’ Chester told the Associated Press in March. 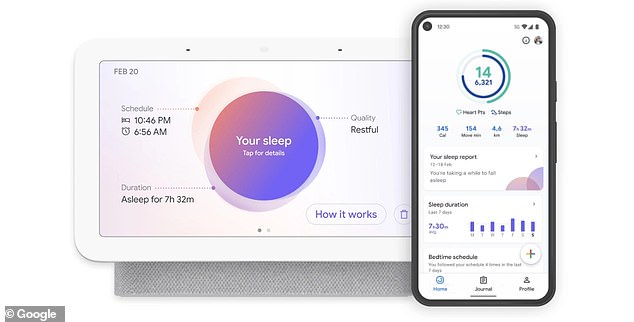 Introduced in March, the Nest Hub is supposed to generate weekly sleep reports with easy-to-understand breakdowns on the length and quality of sleep, how frequently the user gets up at night

Google emphasized there are privacy protections built into the Hub’s sleep-sensing feature, including the fact that owners must opt in to activate it.

Also, sleep data is stored on the device itself, meaning it won’t be sent to Google’s data centers, and ‘will not be used for marketing’ purposes,’ according to Google Nest project manager Ashton Udall.

Meanwhile a privacy message on Fitbit indicates the snoring data will be used ‘improve our products and services and research new ones.’

Google did not immediately respond to an email from DailyMail.com about how data from the Fitbit snoring monitor will be used.

Boris Johnson carries out major shake-up of his ministerial team

How to see the harvest moon

Another Billionaire Has Safely Sent Tourists Into Space

When IS the ideal time to have your flu jab?

US steps up deportation of Haitian refugees from Texas camp

Rupert Murdoch’s launch of talkTV is about opportunism as…

Belize leans on coral reefs to drive bargain with…