An NHS nurse who paid the ‘ultimate price’ after dying with coronavirus had expressed concerns about a lack of PPE and training, an inquest today.

Rizal Manalo was working as a nurse on a ward at Glan Clwyd Hospital in north Wales as well as a part-time carer nearby when he contracted Covid-19.

The 51-year-old, known as Zaldy to friends and colleagues, was admitted to hospital in May last year.

After a number of weeks he was transferred to intensive care where he died from multi-organ failure after he developed Covid-19 pneumonia on June 14.

An inquest into his death was told this week how Mr Manalo had not undergone training and testing to ensure that his mask fitted correctly while working on wards.

NHS nurse Rizal Manalo, 51, wo died from Covid-19 in June last year had expressed concerns about a lack of PPE and training for staff, , an inquest today

The father-of-two also raised concerns to his wife Agnes about the lack of personal protection equipment available (PPE) in the weeks prior to his death.

He also complained about the over-reliance on agency staff who were not trained up to standard and about ‘unpleasant’ working conditions on the ward.

In a statement read at the Ruthin hearing Mrs Manolo said her husband started work at Glan Clwyd in 2014, having moved to North Wales from the Philippines in 2001.

She said he worked hard to earn money for his family and was highly respected in the community.

At the time of his death she said: ‘He was a good husband and a loving father to his children. He protected and cared for us.’

The hearing was told Betsi Cadwaladr University Health Board carried out an investigation following his death on June 14 last year. 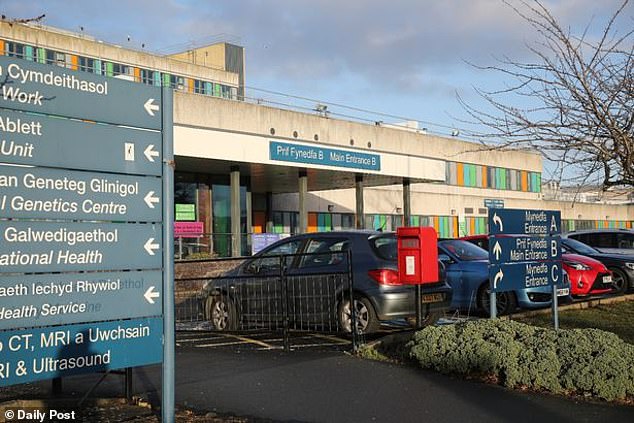 Rizal, known as Zaldy to friends and colleagues, was working as a nurse on a ward at Glan Clwyd Hospital in north Wales as well as a part-time carer nearby when he contracted Covid-19

It was only then that managers learned that Mr Manalo had a second job working at a nursing home in Abergele.

Dr Kath Clarke, who led the investigation, said it was very unusual to lose a colleague and it was important that everything be done to protect employees.

The review found, she said, that although there had been an adequate supply of PPE there was sometimes an issue over distribution.

But she stressed that so early in the pandemic the situation was rapidly changing and new guidelines were being issued.

She said: ‘We were working in the dark as much as anybody. It was changing all the time.’

Dr Clarke told the inquest that training was available for staff at the time on ensuring that masks fitted correctly but it was found that Mr Manolo had not had the ‘fit test’.

She said since his death systems were now in place to follow up those who hadn’t had the tests, and the same applied to agency staff.

John Gittins, coroner for North Wales east and central, concluded his death was as a result of natural causes at Ruthin County Hall on Wednesday.

Mr Gittins said the evidence was not strong enough for him to record it as a death from industrial disease given the other factors at play.

He said: ‘I am reassured that lessons have been learned where they can be learned.’

Expressing his condolences to Mrs Manolo, he added: ‘The picture I have of him is of a kind, generous, compassionate, loving person who was committed to helping others and paid the ultimate price for doing so.

‘I hope you are proud of him because you should be.’

A statement from Betsi Cadwaladr University Health Board said: ‘ As a health board we hope today’s inquest has given the family, work colleagues and many friends of Rizal ‘Zaldy’ Manalo some closure after his tragic and untimely death.

‘The tributes already paid to Zaldy bear testament to his dedication towards helping other people and his positive character.

‘He was a valued and trusted nurse and an integral part of our team on Ward 5 at Ysbyty Glan Clwyd, who came here from the Philippines with his compatriots to care for our patients in 2001.

‘We wish Zaldy’s wife Agnes and their children, Nicole and Dylan, peace and happiness as they continue their lives without him.

‘However the messages of condolence and tributes paid to him illustrate to me he was a fine nurse, who was loved and respected by his colleagues.

‘I sincerely respect those words and offer my heartfelt thanks on behalf of the health board for his years of service to the people of North Wales.’

PIERS MORGAN:  RIP General Powell – the greatest president the US never had

Ireland experiencing a ‘twin peak of the Delta variant’

The problem with new-build property

She’s Making History in Opera. Can She Help Ensure Its…

In Hollywood, nothing gets resurrected more often than Mel…

Anni Bergman, Therapist Who Listened to Children, Dies at…

Billy Connolly: ‘It might be lovely on the other side’ |…