These scenarios are intended to predict future energy requirements, and what energy sources would be needed to supply them, in order to estimate resultant emissions.

Researchers claim that all the energy firms’ decarbonisation scenarios show ‘delayed reductions in fossil fuel consumption’ and run the risk of ‘overshooting vital climate goals’ laid out in the Paris Agreement.

Adopted in 2016, the Paris Agreement aims to hold an increase in global average temperature to below 2°C (3.6°F) and pursue efforts to limit the temperature increase to 1.5°C (2.7°F).

But decarbonisation scenarios produced by BP, Shell and Equinor are ‘incompatible’ with these goals for a safe and habitable planet, according to the study, and could lead to ‘catastrophic impacts’. 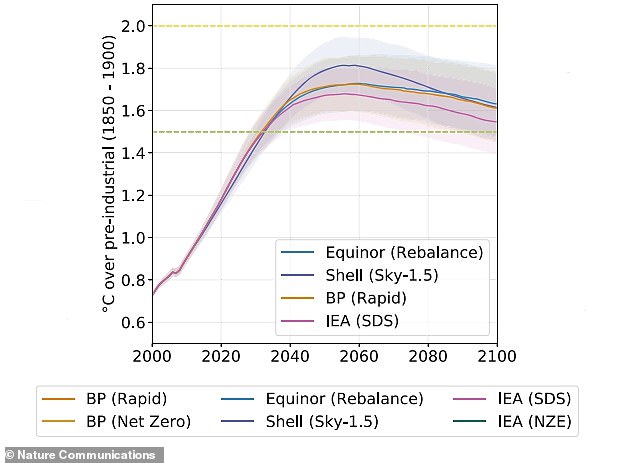 Results of the study show decarbonisation scenarios that overshoot the 1.5°C warming limit in the Paris Agreement

Decarbonisation scenarios are visions or scenarios of how to reduce carbon dioxide emissions by replacing fossil fuels in the energy system.

They are produced by public, commercial and academic institutions and project what future energy requirements, and resultant emissions, would look like.

These scenarios inform planning across the globe by governments and other organisations aiming to determine how rapidly different sectors must reduce greenhouse gas emissions.

Decarbonisation scenarios are built by predicting future energy requirements for different economic sectors, such as agriculture and manufacturing, and projecting what energy sources would be needed to supply them, such as fossil fuels, nuclear, or renewable power.

These projections of the future energy mix are then used to estimate what the resultant carbon emissions would be.

Fossil fuel companies have produced their own scenarios for future global energy consumption for decades, but the underlying assumptions of the scenarios to back up their claims that they’re consistent with the Paris Agreement are ‘not always clear’, the researchers say.

Hitting the Paris Agreement targets is seen as key to averting a planetary catastrophe, leading to devastation in the form of frequent climate disasters and millions of deaths.

The study was led by researchers at Climate Analytics and Imperial College London, and published today in Nature Communications.

‘Most of the scenarios we evaluated would be classified as inconsistent with the Paris Agreement,’ said study author Dr Robert Brecha at Climate Analytics.

‘They fail to limit warming to well below 2°C, let alone 1.5°C, and would exceed the 1.5°C warming limit by a significant margin.’

Fossil fuel companies have produced their own scenarios for future global energy consumption for decades, but the underlying assumptions of the scenarios to back up their claims that they’re consistent with the Paris Agreement are ‘not always clear’, the researchers say.

For example, in 2020, BP detailed multiple decarbonisation scenarios in a report, including ‘Net Zero’ and ‘Rapid’.

And in 2021, Shell released its emissions reduction plan, called ‘Sky 1.5’, that outlined how the world could meet the ‘well-below 2°C’ goal.

For the study, the experts analysed a total of six decarbonisation scenarios published between 2020 and mid-2021.

Four were from the energy firms (two from BP, one from Shell and one from Equinor), while another two were developed by the International Energy Agency (IEA), an intergovernmental organisation based in France.

They found that five of the six scenarios assessed overshoot the 1.5°C (2.7°F) warming limit by a significant margin. 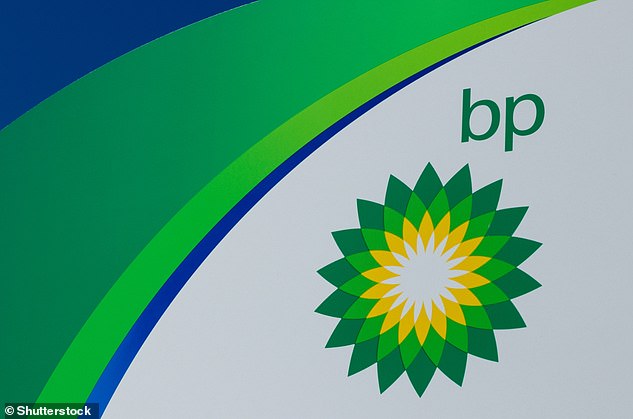 Amazon’s carbon emissions grew 18 per cent in 2021, largely due to demand for its services during the Covid pandemic.

In a new report, the Seattle tech giant has revealed it emitted 71.54 million metric tons of carbon-dioxide equivalent last year.

This marks a 40 per cent rise, and the third straight year of increased emissions, since the company started sharing the figures back in 2019.

Only the IEA’s ‘Net Zero by 2050’ scenario is aligned with the Paris Agreement target of limiting warming to 1.5°C, they found.

BP’s Net Zero scenario results in a median peak warming of 1.65°C, not quite low enough to be consistent with the Paris Agreement criteria.

Results show that it’s crucial fossil fuel companies aren’t allowed to ‘mark their own work’, according to co-author Dr Robin Lamboll at Imperial.

‘It’s good that traditionally fossil-based institutions are planning for the upcoming transition to clean energy,’ he said.

‘However, it’s important that we don’t allow oil companies to mark their own work when providing suggestions for how the world can transition away from fossil fuels in a way that meets the Paris Agreement.

‘It’s also important to be aware of these biases when databases of scenarios like this are used to frame what is possible and what is ‘radical’ in terms of climate goals.’ 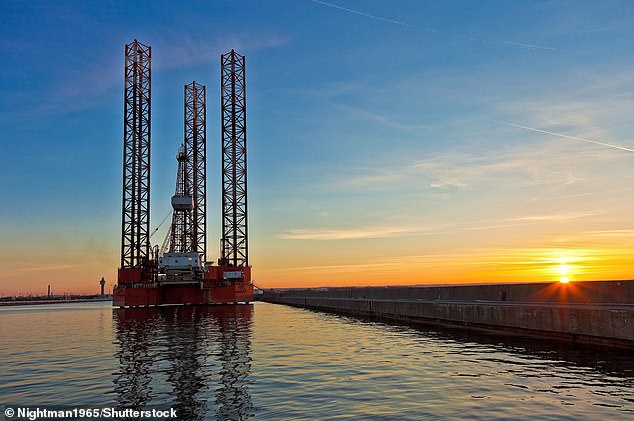 Fossil fuel companies have produced their own scenarios for future global energy consumption for decades, but the underlying assumptions of the scenarios to back up their claims that they’re consistent with the Paris Agreement are ‘not always clear’, the researchers say. Pictured, an oil rig for drilling an oil well

According to the team, their study gives policymakers the tools to critically assess scenarios published by a number of public, commercial and academic institutions describing how they will meet the Paris Agreement goals.

‘Our study provides a direct line of sight from pathways to temperature.

‘Governments should use these tools to carry out a robust assessment of the energy-system transformation to meet the Paris Agreement goals.’

Shell said it’s transparent on how it models its decarbonisation scenarios, which it said are assessed by the MIT Joint Program on the Science and Policy of Global Change.

THE PARIS AGREEMENT: A GLOBAL ACCORD TO LIMIT TEMPERATURE RISES THROUGH CARBON EMISSION REDUCTION TARGETS

The Paris Agreement, which was first signed in 2015, is an international agreement to control and limit climate change.

It hopes to hold the increase in the global average temperature to below 2°C (3.6ºF) ‘and to pursue efforts to limit the temperature increase to 1.5°C (2.7°F)’.

It seems the more ambitious goal of restricting global warming to 1.5°C (2.7°F) may be more important than ever, according to previous research which claims 25 per cent of the world could see a significant increase in drier conditions.

The Paris Agreement on Climate Change has four main goals with regards to reducing emissions:

2) To aim to limit the increase to 1.5°C, since this would significantly reduce risks and the impacts of climate change

3) Governments agreed on the need for global emissions to peak as soon as possible, recognising that this will take longer for developing countries

Inside an Egyptian resort that has something for everyone,…

I Couldn’t Love You More by Esther Freud audiobook review –…

Two artists on one pad in Dublin 3