Should investors be worried about stagflation?

The average investor has had it hard this year. Not only have they been forced to grapple with inflation in their own day-to-day spending, but markets have been sliding for much of 2022.

Now they’re faced with the prospect of stagflation, a period characterised by high inflation, slowing growth and high unemployment.

Earlier this week the head of the CBI, Tony Danker, said the UK had reached a point of stagflation and risked a lost decade of growth. The combination of high inflation and stagnant growth is likely to be felt by companies across the board.

We look at whether stagflation has already been priced into markets and which sectors will be most affected.

Stagflation is a ‘toxic’ combination of high inflation and stagnant growth

Have we reached a point of stagflation?

Is the UK really in a period of stagflation or are Danker’s comments overblown?

Inflation has already reached 11 per cent and while likely to fall in 2023 will remain at an elevated level, according to the Bank of England.

Unemployment figures in the UK have inched higher in recent months – figures from October show another monthly increase, up 74,000 on September, to a record 29.8 million.

What is concerning markets most, however, is the signs of slowing economic growth in conjunction with inflation and unemployment.

The government has already said the country is in recession, which is defined as when an economy shrinks for two quarters in a row.

All of this suggests the UK has reached, or is at least nearing, a period of stagflation.

Jason Hollands, managing director of Bestinvest says: ‘Stagflation is a toxic combination of prolonged economic stagnation and high inflation. so at a time when economies are dipping into recession – or teetering on the brink – and inflation remains high, it is unsurprising that the ‘S’ word is currently being talked about.

‘However, a more plausible scenario is that inflation has peaked, and will start to gradually abate from here and the recession will be a shallow rather than deep one.’

Others don’t think the UK has, or indeed will, reach a point of stagflation akin to the 1970s. Blackrock Investment Institute’s base case scenario anticipates ‘a recessionary backdrop in the near run with inflation falling before ultimately settling down to levels around 0.5 per cent to one per cent above the current target.’

What does it mean for shares?

Market commentators may not agree on whether the UK has reached a point of stagflation, but high inflation and slowing growth is unlikely to be good news for equities.

Companies will have to fight falling revenues and rising costs which heaps pressure on profit margins.

Stagflation is a toxic combination of prolonged economic stagnation and high inflation.

Hollands says: ‘With 2023 around the corner, the inflationary concerns that have dogged markets during 2022 are likely to be increasingly eclipsed by worries about deteriorating fundamentals as growth stalls and financial conditions tighten as a result of both rates rises and Quantitative Tightening.

‘In the UK we have the additional hand grenade of tax rises to add to the mix. All of this is going to result in meaningful cuts to household spending on non-essential items and weigh on capital spending by businesses too.’

An added problem is that while high inflation and slowing growth are problems in isolation, stagflation is a poisoned chalice for policymakers.

Their job is to keep inflation under control and support the government at keeping steady employment and growth.

They also need to raise interest rates to try and combat inflation but doing so runs the risk of sending unemployment even higher. 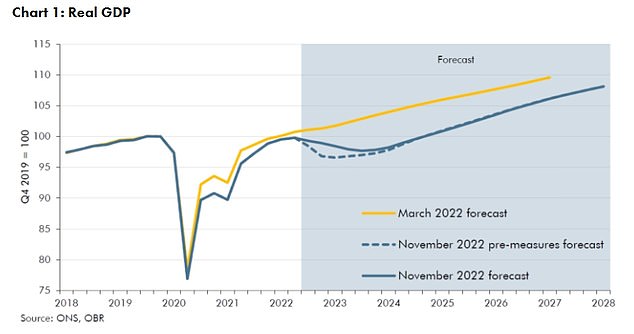 The OBR forecasts GDP will return to growth in 2024

Keeping rates where they are to try and keep employment steady risks making inflation even worse.

Vivek Paul, UK Chief Investment Strategist, BlackRock Investment Institute says: ‘We think we are in a new regime of greater macro and market volatility is playing out.

‘The UK offered a glimpse of it with higher volatility playing out and the brutal policy trade off between growth and inflation the regime entails.

‘The Bank of England aggressively hiking rates and initiating bond sales as it fights inflation was forced to intervene to stabilize gilt markets that balked at the government’s ill fated plan to spend big to stimulate growth.’

Is stagflation priced into stock markets?

Although stagflation poses a significant challenge to the economy and UK stocks, could its effect already be priced into markets?

Given the volatility of markets this year and a clear indication the UK is likely to fall into a recession, companies may have already braced themselves for the worst.

Since October, however, there has been a recovery of over 10 per cent and ‘equity markets are no longer pricing in much valuation discount to reflect the recessionary/stagflationary outlook they face over the coming year,’ says Rupert Thompson, chief economist at Kingswood.

‘The price-earnings ratio for global equities is back up from an October low of 13.2x to 15.5x and is now only slightly below its 30-year average of 16x.’

Paul, who is clear he doesn’t anticipate stagflation, says understanding what is priced in is critical to assessing the market.

‘We will turn positive on equities when we think the damage is priced or our view of market risk sentiment changes. Yet we won’t see this as a prelude to another decade long bull market in stocks and bonds.

‘In the UK this year, negative sentiment around the country’s economic prospects has hurt domestically focused mid caps more than the export oriented and energy sector heavy large cap indices.

‘Consensus expectations for 2023 corporate profits have come off with earnings now seen falling. But we think there is more room to run as a U.S. recession spills over.

‘Though earnings multiples have fallen in 2022, earnings expectations for mid caps have been relatively stable, suggesting the sluggish domestic backdrop for the UK may not yet be priced in. 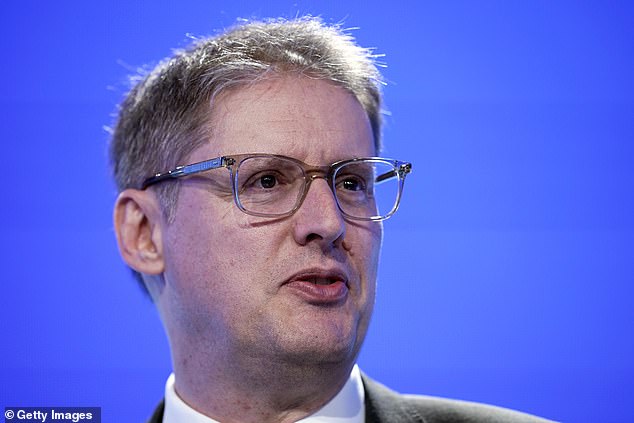 Which sectors are worse off?

Market commentators may differ on whether the UK has reached a point of stagflation, but a period of high inflation and slowing growth is unlikely to be good news for equities.

Companies will have to fight falling revenues and rising costs which heaps pressure on profit margins.

Hollands points to businesses operating in economically sensitive sectors like consumer spending which ‘gets squeezed from both declining real incomes and rising unemployment.’

‘Vulnerable areas of the equity market include consumer discretionary companies such as non-essential retailers, leisure and hospitality, as well as housebuilders and the wider real estate sector.

‘Growth sectors like tech and communication services are particularly at the sharp end, since elevated inflation is accompanied by the need for a higher interest rates.

‘When investors are battening down the hatches, balance sheet strength and current profitability are more prized than what might be delivered over the next several years.’

Defensive stocks like energy and consumer staples have performed well and are likely to continue to do so into 2023 in a stagflation environment.

They tend to be companies with strong pricing power which can pass on higher costs to customers without risking a fall in demand.

The FTSE 100 is likely to remain resilient due to its high exposure to consumer staples, healthcare and utilities, with very few tech stocks.

The blue-chip index is broadly flat on the year, up 0.47 per cent, while the domestically focused FTSE 250 has lost more than 20 per cent in the year to date.

The FTSE 100’s weighting towards oil and gas companies which theoretically should do well if volatility in energy prices continues.

‘While oil and gas prices are typically seen as sensitive to global growth, there are extenuating factors in the current environment – the war in Ukraine – which puts a floor on prices and OPEC+ have been thus far been disciplined in managing output to support prices,’ says Hollands.

‘Commitments by governments to achieve Net Zero have also driven energy companies to adopt a tight capex discipline, focusing them on maximising the profitability of their existing cost bases. The UK’s high exposure to the energy sector is therefore unlikely to be a hindrance during a period of stalling growth and high inflation.’

Where to invest for stagflation

The make up of UK markets means its defensive tilt could benefit investors in a period of slowing growth and higher prices.

Hollands recommends Liontrust UK Growth which focuses on FTSE 350 companies and has outperformed the IA UK All Companies sector for the past five years.

The portfolio, which is managed by Anthony Cross and Julian Fosh, currently has 17 per cent in consumer staples, 16.5 per cent in energy and 15 per cent in healthcare. Its top holdings include Shell, BP, Unilever, Diageo and British American Tobacco.

He also notes TB Evenlode Income has 28 per cent in consumer staples including big positions in Unilever and Diageo.

‘While the fund seemingly has 10 per cent in tech, a big chunk of this is represented by Sage Group, the payroll software giant whose systems are deeply embedded with its business clients and whose revenue model is based on recurring licence agreements – the sort of model which should prove resilient in tougher times.’

Paul is more downbeat about UK stocks moving into 2023 and says strategic portfolios ‘will need to be more nimble in the new regime.

‘The asset mix has always been important, yet our analysis posits that getting the mix wrong could be as much as four times as costly as versus the Great Moderation period .

‘We think heightened uncertainty calls for a return of term premium to UK gilts, and the looming recession not yet fully reflected in valuations darkens the prospects for UK stocks.’

No Tickets Sold With All Six Powerball Lottery Numbers

Arkansas’ GOP Governor Digs Into The ‘Cost’ Of A Trump Endorsement

The 10 most baffling Oscar wins

Body of Orange County lawyer back in U.S. from Mexico,…

I miss my wife every day, but knowing she died with dignity…