In 2014, a year prior to their fifth place finish in “The X Factor UK,” the vocal quartet 4th Impact—composed of sisters Almira, Irene, Mylene and Celina—flew to South Korea to audition for various entertainment agencies and compete in talent shows, like “Superstar K.”

One agency was so impressed with the girls’ talents that they considered signing them. But then, it found out that they had already released an album.

“We actually passed an audition and they were ready to sign us up. But as much as they wanted to get us, they didn’t because we already had a manager and a studio album. They were looking for artists who have never been under any management,” Irene recalled in a group interview at the recent launch of 4th Impact’s new single, “Tapat Sa ‘Yo,” at the Teatrino in San Juan City.

But eight years later, things seemed to have gone full circle. Now, 4th Impact is part of the Manila-based South Korean media and events company ShowBT, whose roster of talents include SB19 and KAIA. Sony Music Philippines, on the other hand, takes care of their music’s publishing and distribution.

“We managed to get in touch with ShowBT through a friend who had worked on some of SB19’s music videos. We all auditioned one-on-one in front of Sir Charles [Kim, ShowBT CEO] and the others. And then, he humbly asked us, ‘Why did you choose our company?’ We told him that we appreciate your belief in Filipino talents,” Irene related.

“Having us would be an honor for us sisters because we’re fans of K-pop and P-pop,” she added. “It’s a dream come true … Perhaps it was meant to be.”

As ShowBT talents, 4th Impact now has access to South Korean composers and producers, like Lee Oh-won who has worked with SHINee’s Taemin, Stray Kids, TVXQ, Wanna One and SB19. The group’s latest release, the elegantly restrained ballad “Tapat Sa ‘Yo,” had Lee at the helm with the girls providing creative input.

“He flew here from Korea just to guide us. He’s quite the perfectionist, so he had us doing numerous takes,” Celina related.

One thing they observed working with Lee was that the producer wasn’t as concerned with their singing’s technical aspects as much as he was with the emotional delivery. “Mapuso sila. The more you show off, the less they like the vocals. They wanted us to sing with a lot of emotions, almost as if we’re weeping,” Almira said.

“He wanted us to sing in a way that will make the listeners feel that we’re just singing beside them,” Celina said. “We felt so proud, because he said we have beautiful voices.”

Their previous single, “Here We Go,” on the other hand, is more in line with the familiar K-pop style that mixes dance, R&B and rap. The song was produced by Korean music artist Choi Young-ho. “We had to train hard for it because we had to sing and dance at the same time,” Almira said.

“We have always loved dancing since we were young. But it’s challenging because Filipino fans are so strict. Even if you’re dancing, you have to sing completely live. So there we were, singing, dancing and belting. This era will be on a different level,” Irene said. 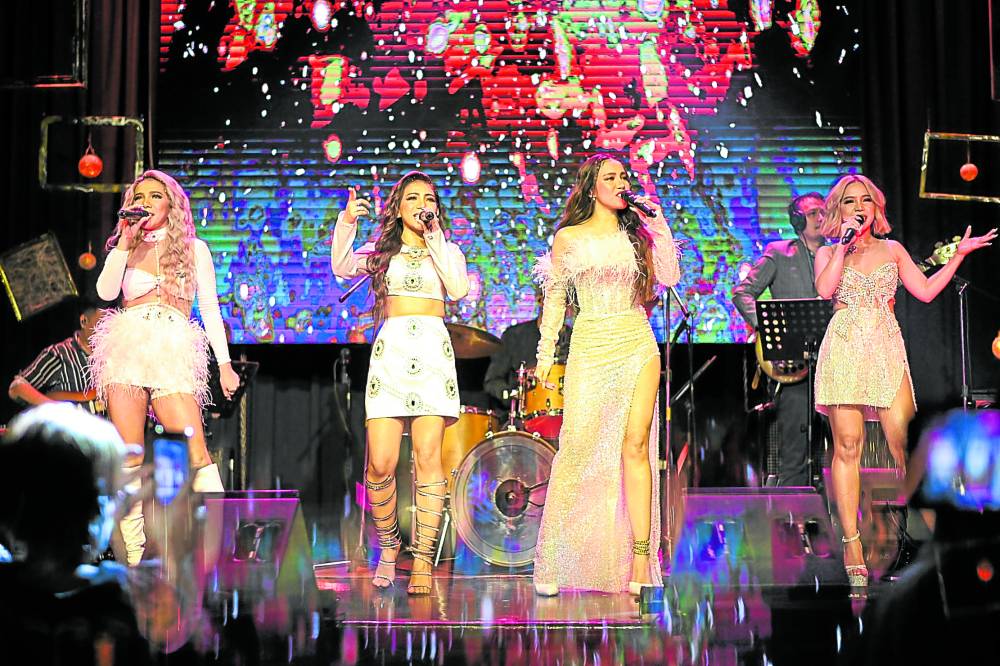 While 4th Impact’s singing prowess is undeniable—as evidenced by their numerous wins in international singing contests, like the World Championships of Performing Arts—the group is known primarily for covers. This time, with ShowBT, the focus shifts to original material.

“Here We Go’s” lyrics were written entirely by the sisters. For “Tapat Sa ‘Yo,” they collaborated with songwriters Angelo Calucin and Renz Salazar. “The lyrics are now very personal, and we’re able to turn our own experiences or hugot into songs,” Irene said.

As for their future releases, Almira, Celina, Mylene and Irene said they’re working on an EP. While they can’t divulge anything about their upcoming songs yet, they assured fans that they will sound nothing like their past work.

“Magugulat sila. It’s something that will make fans go, ‘Ay, sila ’yan?’ ‘Tapat Sa ‘Yo’ is more of a reminder that we can and are good at singing ballads. But the next few songs will be of different styles and genres,” Almira said. “Now we’re singing original songs.”

There was a point in their career when they thought that their “X Factor” stint was already their peak. But as it turned out, they were only getting started. “‘X Factor’ helped us become known in the country and abroad. We thought we had already peaked. But now we’re starting again,” Almira said.

“The pandemic had us losing hope and losing shows. But we prayed, and ShowBT came to our lives,” she added.

The hottest entertainment news straight to your inbox

As Indiana passes abortion ban, some South Carolina Republicans pause on the brink of tightening laws

EU braced for legal challenges to rules designed to tackle…

Every Song Ranked Worst to Best

Manchester City star Benjamin Mendy boasted he had sex with…

Patrick Swayze would have been turning 70

OC Board of Education unusually divided over new trustee…

Hundreds of authors to read from Salman Rushdie’s works in…

The Trials review – tomorrow’s children hold us to account…