Starring in The Outlaws, Christopher Walken tells how its creator’s appetite sealed the deal

Christopher Walken has pretty much done it all. He won an Oscar for 1978’s The Deer Hunter, played a Bond villain in 1985’s A View To A Kill, gained cult status for his extraordinary dancing in the 2010 video for Fatboy Slim’s Weapon Of Choice, and through appearances in films such as Pulp Fiction and True Romance has cemented a reputation as one of the greatest actors of his generation.

Yet everything begins, he says, at his home in Connecticut – specifically in his kitchen, standing on his own, talking to himself.

‘The work I do on the scripts, you know, for a long time I stand in my kitchen, all by myself and try to figure it out. My process is to read over and over until it sounds right. Suddenly, it’s almost like talking to somebody you know: you believe them or you don’t. And when I start to believe myself, I think I’m on the right track.’

It was in his kitchen that Christopher first read the script of Stephen Merchant’s The Outlaws, a new BBC comedy-drama set on a Bristol community service scheme. ‘It’s very good writing, you can tell that straightaway if you’ve been doing it for as long as I have,’ says Christopher, 78.

Christopher Walken (pictured), who won an Oscar for 1978’s The Deer Hunter, is set to star as Frank in new six-part series The Outlaws

‘I stand in my kitchen and I read the lines out loud, and these were very good words.’ And it was in his kitchen too that he first met Stephen and was persuaded to take the role.

‘I sat down with him for a couple of hours. As a matter of fact I made him an omelette, and he ate the whole thing and asked me if he could have some more. And I thought, “Yeah, I like this guy. I’ve got to work with him.”’

The result is the new six-part series on BBC1 in which Christopher plays Frank, a roguish American grifter who’s lived in the UK for the best part of 40 years and now finds himself in trouble with the law yet again.

‘He married an Englishwoman and has children and a life in England, but I’d say he’s barely assimilated,’ says Christopher.

‘He’s kind of a ne’er-do-well, I guess, a good man who’s good-hearted, good-natured, but he’s made a lot of mistakes. He probably has poor judgement, often in trouble with the law, you know?’

Christopher brings exquisite deadpan timing to conman Frank as he moves back in with the daughter he abandoned decades before and bonds with his strait-laced grandson (as well as mentoring him in the fine art of relentless womanising).

The comedy couldn’t be more fish out of water – the New Yorker in Bristol, the inveterate crook trying to fit into a family. The show’s set in Bristol because that’s where Stephen Merchant is from.

His parents were community service officers there, which inspired this genre-busting caper about the community payback scheme that throws together people from all walks of life, from a kleptomaniac straight-A student (Rhianne Barreto) to a young man caught up in county lines drug crime (Gamba Cole) and Merchant’s geeky lawyer who finds himself doing community service after getting into a bit of bother. 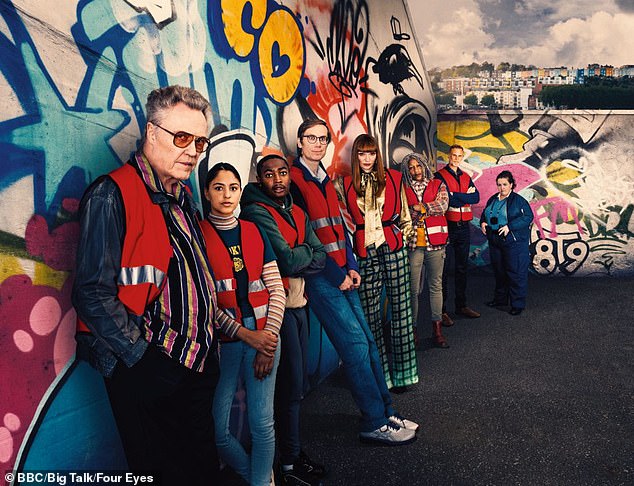 When their worlds collide at the rundown community centre the team have been tasked with renovating, they suddenly find they have more in common than they thought.

And talking of worlds colliding, you don’t get culture clashes much bigger than Christopher Walken rocking up in pandemic-stricken Bristol. He’s an actor from a different era, one before streaming, and yet here he is on a BBC/Amazon co-production.

His raspy American drawl is highly distinctive, yet this is a comedy full of ripe Bristolian vowel sounds. How did that happen?

‘Look, I’m an actor, it was a good job, I’m a fan of Stephen Merchant’s and I got to come to England. I’ve been in England many times in my career – not Bristol – but I’ve always enjoyed myself here. So it was just a good job,’ he says.

I still have to work out how to answer my mobile

He filmed two series of The Outlaws in two separate stints this year. The first coincided with the Bristol riots in March, the second with Euro 2020 in June.

When he arrived on set the other actors stood in awe. ‘I was majorly starstruck,’ says Jess Gunning, who plays the jobsworth community payback supervisor Diane.

‘I mean, it’s just crazy isn’t it? He’s a really down-to-earth guy and he’s so professional and does his thing. But I did get goosebumps watching him on the monitor. You know, there’s just something about him. He’s a movie star and yet he’s here in Bristol in the freezing cold in a community payback hi-vis tabard. Really?’ 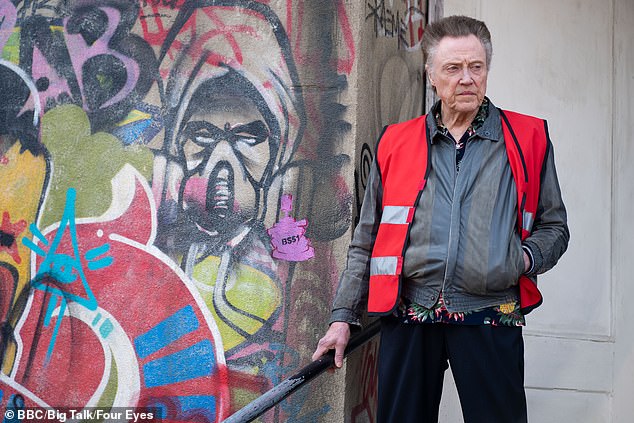 Christopher said he hopes to be unable to attend his own 96th birthday party because he’s busy working somewhere. Pictured: Christopher as Frank in The Outlaws

But Christopher says he got something from the younger cast, which also includes Poldark’s Eleanor Tomlinson, too. ‘I was in the make-up trailer with a lot of my castmates who are younger than I am.

‘And I don’t have any sort of technology, I don’t even have a mobile phone. I mentioned an actor named Clifton Webb who was marvellous, one of my favourites. He made a lot of movies in the 40s in Hollywood. None of my younger colleagues knew who he was. I said, “He’s one of the best actors, how could you not know?”’

So one of the younger actors took out his phone and Googled Clifton Webb.

‘In 30 seconds he had all these details, when he was born, where he started, his credits, where he lived… I thought, “Well, I gotta get me one of those cellphones, iPads or whatever it is. And I have to figure out how to do that.”’ So, as a result of actors talking to actors about other actors, Christopher Walken now has an iPhone.

‘I got a call on it this morning and I tried answering it but I ended up cutting the whole thing off. I still have to figure out how to answer it when it rings. But you know, small steps.’

He still sees acting as one job following another. He talks about getting restless when he’s not working almost 70 years into a stellar career that began as a child actor.

‘For me, and it’s always been true, one of the best feelings for an actor is going home in the car at the end of the day, going back to the hotel, and thinking, “I was good today. That was good.” There’s almost nothing better.’

And with two series of The Outlaws in the can, once again he’s looking for that next job. ‘Somebody said to me actors don’t retire. They get retired. And so far I haven’t been retired.

‘One of my favourite stories about actors is that John Gielgud was having his 96th birthday and I think it was the Royal Family wanted to throw him a big party.

‘The story I heard was that he had to respond and say, “Very sorry, I’m not able to attend because I’m on location shooting a movie.” I have always hoped that on my 96th birthday I’ll be working somewhere and unable to attend my own birthday party.’

Holiday money: Travellers reminded to sort currency before the airport

SZA shares ‘I Hate U’ single after SoundCloud…

Lloyd Austin reacts with awkward silence when asked if he…

Country Matters: In praise of our helpful little bob-tailed…

The Australia exit checklist: everything you need to prepare…

Adele Compared Herself to Voldemort When Her Eyebrows…

The first man to hunt wildlife with a camera, not a rifle |…