State pension could hit £10,880 a year if inflation keeps surging

Triple lock: State pension is raised by the highest of price inflation, average earnings growth or 2.5%- if the Government keeps its pledge

The state pension could soar to nearly £10,900 a year if the next Tory Chancellor honours the triple lock pledge and increases payouts in line with predicted sky-high inflation.

The Bank of England has forecast the headline rate will top 13 per cent this autumn – though even at the current 10.1 per cent inflation rate pensioners could see their payments hiked to £10,600, a boost of nearly £1,000 a year.

Under the triple lock, the state pension is meant to increase by the highest of price inflation, average earnings growth or 2.5 per cent, but the Government sparked fury by ditching this guarantee last time.

Both Tory leadership contenders, Liz Truss and Rishi Sunak, have promised to reinstate the triple lock.

The elderly, who received a meagre 3.1 per cent rise in the state pension last April, are facing a tough winter as energy bills surge and the cost of living crisis causes widespread hardship.

However, Sunak’s recent cost of living package provided extra payments for older people, plus enhanced top-ups for the worst off.

A row broke out among top politicians earlier this summer over whether the elderly should get a bumper state pension increase when workers are handed below inflation pay deals.

But former Pensions Minister Ros Altmann, who led a doomed effort to save the triple lock last time, has warned the Government not to betray pensioners again.

Ministers scrapped the earnings element from last April’s stage pension rise because wage growth was temporarily distorted to more than 8 per cent due to the pandemic.

How much could YOU get in state pension next April?

The basic rate is £141.85 per week, or around £7,370 a year, which is topped up by additional state pension entitlements – S2P and Serps – if accrued during working years.

The CPI inflation rate in September is set to determine the state pension rise in April 2023, assuming the Government sticks to its promise to reinstate the triple lock, because it is currently 10.1 per cent while average earnings growth including bonuses is 5.1 per cent.

I paid NI for 44 years but get a smaller state pension than people retiring now – how is that fair?

This is Money’s pensions columnist Steve Webb explains how the revamp in April 2016 was designed to be fair to everyone, and why people who reached state pension age before that don’t need to feel hard done by.

‘The move to the new state pension does not represent a windfall to people who have yet to retire,’ he says.

What do pension experts say?

‘The key inflation figure is that for the year till September, which will be announced mid October,’ says Steven Cameron, pensions sirector at Aegon.

‘The Bank of England is predicting inflation will hit 13 per cent later this year, so the precise increase depends on what happens in the next two months.

‘Granting a double digit increase to state pensioners when those of working age are receiving average wage increases of around half this will no doubt raise questions around whether the triple lock should go ahead.

‘Because the state pension is “pay as you go”, it’s those who are working today who pay for today’s state pensions through their National Insurance.

‘However, last April, state pensioners received an increase of only 3.1 per cent, significantly below current inflation, so will justifiably expect to receive the full benefit of the triple lock.

‘Furthermore, Liz Truss recently recommitted to this, as did Rishi Sunak when Chancellor.’

‘The bigger question is whether the triple lock, which in current volatile times has proven very costly, will survive in its existing form in the manifestos of all parties ahead of the next general election.

Should the Government keep its triple lock pledge and give older people the full state pension increase this year?

‘Moving to a formula which averages the three indicators out over say a three year period would still protect pensioners but without the peaks and troughs a year on year approach could create and arguably creates greater fairness between generations.’

Andrew Tully, technical director at Canada Life, says: ‘The Government has recommitted to the triple lock this year and it would be very brave or even foolhardy for the incoming Prime Minister to renege on that deal so soon into taking up office.

‘Our state pension system isn’t generous by any measure with the UK ranking below the average as measured by gross replacement rates according to the OECD.

‘But the Government does face pressure from all sides and for each percentage point added to the state pension costs in the region of £900million a year.

‘That would add around £11billion to the annual tax bill of the nation if inflation reaches 12 per cent in September. That money will need to come from somewhere. It’s worth remembering today’s workers’ pay for the pensions of today’s retirees.’

James Jones-Tinsley, a pensions technical specialist at Barnett Waddingham, says: Calls for targeted support for the most vulnerable are already gaining pace, with pensioners, who are usually on a fixed income and have higher fuel bills, among the hardest hit.

‘Under the current double lock, state pension increases of the past year have been just a third of CPI, making it a struggle to maintain their standards of living. But reinstating the state pension triple lock will make life better in the short term at least. 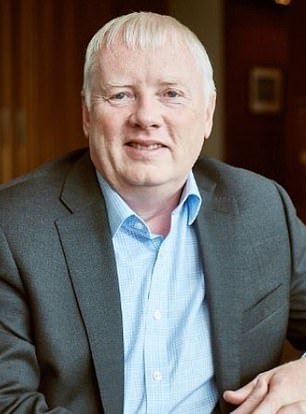 Steven Cameron: Last April, state pensioners received an increase of only 3.1%, significantly below current inflation, so will justifiably expect to receive the full benefit of the triple lock

‘The two-month countdown has now begun for September’s CPI figure to be released in October, which will tell us whether we could be looking at a double-digit increase come April 2023, once a decision is made on state pensions.

‘But, such measures could stoke inflation further and run counter to promises of increased fiscal responsibility across the economy.

‘This could be a bitter pill to swallow for the next Prime Minister, especially after torpedoing inflation busting pay rises for public sector workers on the same grounds.’

Dale Critchley, pension policy manager at Aviva, says: ‘The triple lock has been successful in boosting pensioners’ retirement incomes, since 2010.

‘It is important as the state pension continues to provide the largest single source of income in retirement for most retirees.

‘As all in society are experiencing significant cost of living pressures, we therefore welcome the Government’s position that the full triple lock will be reinstated next year.’

How does the state pension work?

The basic state pension is currently £141.85 a week, or around £7,400 a year.  It is topped up by additional state pension entitlements – S2P and Serps – accrued during working years.

People who have contracted out of S2P and Serps over the years and retire after April 2016 get less than the full new state pension.

But they can fill gaps in unpaid and or underpaid National Insurance in previous years, make voluntary top-ups to buy extra qualifying years, and build up more years if they have enough time between now and state pension age.

But even if you paid in full for a whole 35 years, if you contracted out for some years on top of that it might still reduce what you get.

Everyone gets the option of deferring their state pension to get more in their later years. You can check your NI record here.

‘I was extinguished by men in suits’: Darren Hayes on surviving homophobia – and finding happiness | Australian music

I Couldn’t Love You More by Esther Freud audiobook review –…

What to do about cracks in a kitchen sink

Two artists on one pad in Dublin 3