A gorgeous and detailed Roman mosaic has come back home to Israel after more than ten years touring major museums worldwide.

The 1,700-year-old mosaic was initially discovered by accident in 1996 by Miriam Avisar from the Israeli Antiquities Authority (IAA) during a dig that was trying to save archaeological finds in a squite on HeKhalutz St. in Lod.

It took another 13 years for it to be fully unearthed by researchers.

‘It was the biggest and most impressive and unique mosaic discovered in Israel,’ Mark Avrahami, head of the IAA Art Conservation Unit, said Monday at the dedication ceremony of the Shelby White and Leon Levy Lod Mosaic Archaeological Center, according to the Jerusalem Post.

‘It was the biggest and most impressive and unique mosaic discovered in Israel,’ Mark Avrahami, head of the IAA Art Conservation Unit, said Monday. Above: A detailed look at one portion of the mosaics, featuring several types of fish 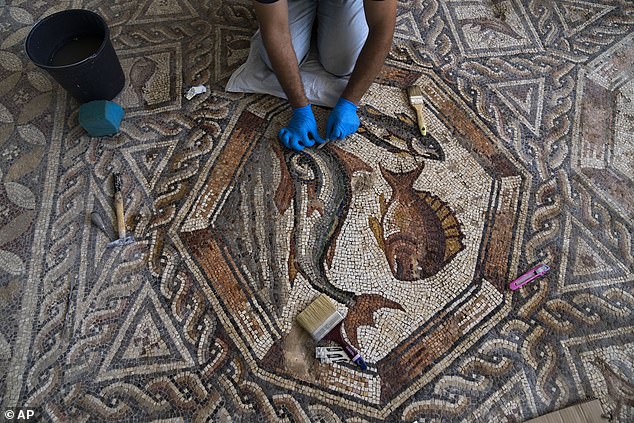 Although the beautiful mosaic was first found in 1996, it took another 13 years for archaeologists to fully unearth it. A worker is seen cleaning a portion of the mosaics 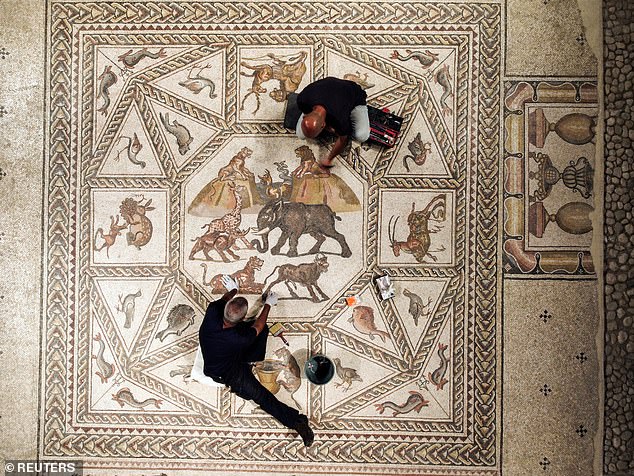 The mosaic’s new home is at the Shelbhy White and Leon Levy Mosaic Lod Archaeological Center. A worker is seen above cleaning a Roman-era mosaic featuring elephants, fish and other beasts

The mosaic measures 56 feet by 30 feet – quite massive.

It features a collection of animals, including an African elephant, rhinoceros and giraffe.

‘It is very impressive in its artistic style, and its state of preservation was perfect,’ Avrahami said, adding that the mosaic details includes shadows of the animal images as well as blood dripping from a bull in one panel depicting a hunting or fighting scene with a lion.

The artwork’s new home is at the Shelby White and Leon Levy Mosaic Lod Archaeological Center. 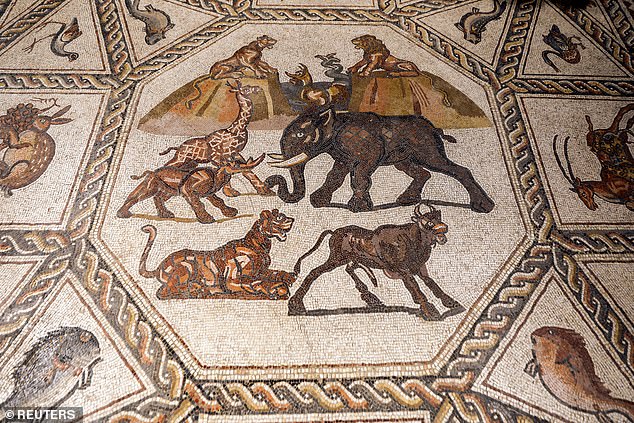 The mosaic adorned the villa of a member of the wealthy elite. That villa was eventually destroyed in an earthquake. A close up is seen showing a wide range of animals in the mosaic

That space offers guided tours and interactive exhibits in Arabic, English and Hebrew.

The upper-class villa that the mosaics adorned in the third or fourth centuries underwent renovations and additions over the years as different empires took over the region.

An earthquake in the year 749 CE took down the entire villa. 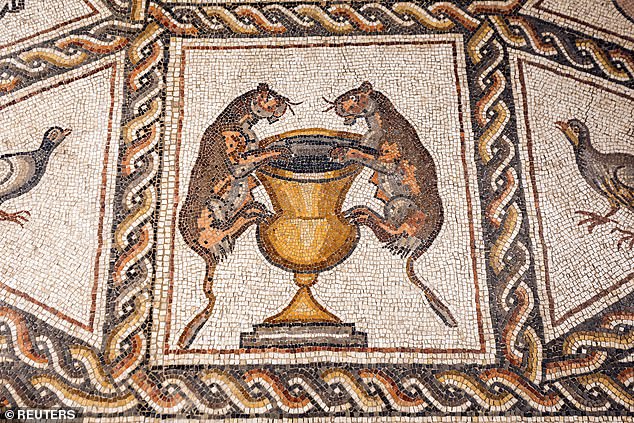 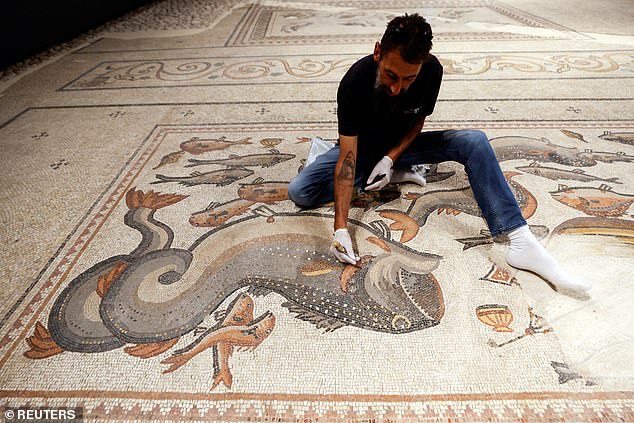 Now that the mosaic has a permanent home, scientists hope it can become a major tourist attraction in the Middle East. A worker cleans a portion of the mosaic featuring fish

When the mosaic was first uncovered, the authorities opened it to the public during a single weekend over the course of which 30,000 people traveled to Lod to see it.

The mosaics were displayed over the years at many institutions, including New York City’s Metropolitan Museum of Art, the Pennsylvania Museum of Archaeology, the Louvre Museum in Paris, Chicago’s Field Museum, and the the Hermitage in St. Petersburg, Russia.

Researchers are hopeful that it can become a major tourist attraction in a part of the world often riven with conflict. 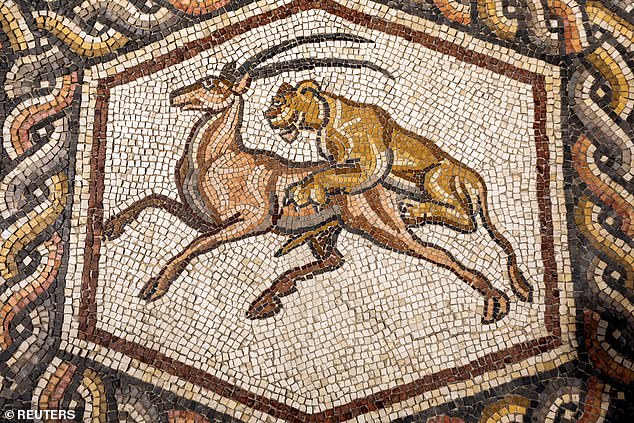 ‘Community tourism in an area of conflict is both an extraordinary experience for the tourist, and an opportunity for the local people to tell their story to the world,’ Yossi Graiver, head of the JLM TIM tourism group, which runs the mosaic museum, told the Post.

‘It’s also an opportunity to develop tourism based on circular economics: people will set up tourism-based businesses telling their stories to the world.’

‘That mosaic isn’t Jewish, Christian or Islamic. Everybody can love it.’ 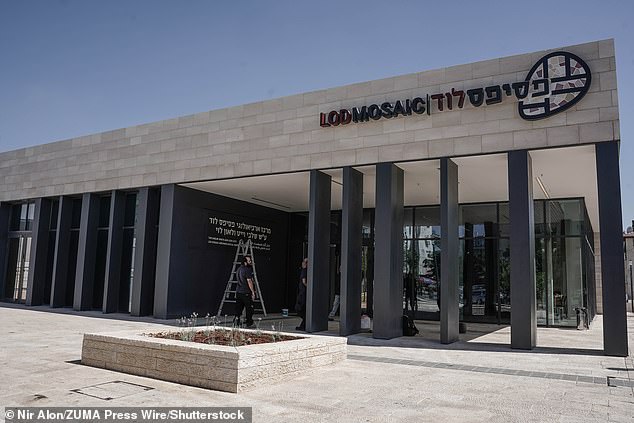 Although the names of the artisans who created the mosaic are unknown, IAA senior research archaeologist Hagit Torge said it would’ve been made by a famous groups of artists who were prevalent in that region and made similar works in other cities.

‘This is the Rolls Royce,’ she said. ‘This is the most visually impressive mosaic we have found. This is the whole point of archaeology – not just the structures, but trying to understand the people who built them and lived in them, their social structure and environmental relations.’

Shelby White, who helped to make the museum happen – along with the Leon Levy Foundation, the IAA and the municipality of Lod – called the new space a ‘dream come true.’

50 Cent and Floyd Mayweather Appear to End Their Decade-Long…

Check your medicine cabinet! How to find recalled drugs

Australian Leader Gave Himself Powers on the Sly

Polio May Have Been Spreading in New York Since April

Weighing in on GMA Network’s triumphs and upcoming projects

IT sector powering services rebound, with hospitality and…

12 books to get you to the end of summer