Jeppe Hein sits down and produces some paper and a tin of watercolours. We’re going to do a quick painting exercise, the Copenhagen- and Berlin-based Danish artist tells me, and invites me to choose a colour. The point is to fill a single sheet with faces. “Don’t worry about what they look like, just think about how you feel,” he says. It’s calming, sort of, and definitely different. Also playful.

“My projects are about opening up hearts,” says Hein. The sentiment is keenly felt in his recent project, a public playground that opened in October in the German town of Monheim. There’s an interactive water installation (part of his ongoing Changing Spaces series) and a zingy patch of green with twisty, buttercup-yellow lampposts and benches that double as climbing bars, swings and slides. “I grew up in the countryside, so there wasn’t a playground, but there were lots of other things to play with,” says Hein. “When I had children, I could see that they could be very creative with almost nothing.”

Hein is one of several contemporary artists who have been lending their design skills to playgrounds, a pattern of collaboration that stretches back to the mid-20th century. It started in Scandinavia when the Danish-Swedish architect and sculptor Egon Møller-Nielsen installed Tufsen (1949), a curvy abstract play sculpture, in a park in Stockholm. Until then, public playgrounds had been fairly formulaic. “There was no pedagogical intention behind them, no creativity,” says the Swiss political scientist and urban planner Gabriela Burkhalter.

In her book The Playground Project (2018), Burkhalter describes several major shifts that have taken place over the past 150 years. Most significantly, while the ’60s saw a period of creativity, when “neighbourhood groups began to take charge of playgrounds themselves”, this was counterbalanced in the ’80s, when the decade’s safety regulations ushered in “a crisis in playground design”. Riskier contraptions were out and more prescriptive, mass-produced equipment was in.

Recently, though, there appears to be a renewed civic interest in intertwining art and play, with the creation of visionary spaces and sculptures that bring joy. And while having to “play” by the rules might still put some artists off, for others it’s part of the appeal.

“As an artist engaged in sculpture, thinking about how the body interacts with what you might make is quite thrilling,” says Eva Rothschild, one of two artists commissioned by Create London and the London borough of Barking and Dagenham to design a new playground in Parsloes Park. The Irish artist, who is known for her large-scale sculptures, was excited about the prospect of her viewers becoming participants. “With a public sculpture, everything you do is about making it difficult to climb on – you want people to interact with it, but just visually and through touch. With a climbing frame it’s the opposite. You think about the pathways through the object, and what size of hand can grip onto a bar.”

Inspired by the stone pyramid on Killiney Hill that she used to climb as a child growing up in Dublin, Rothschild constructed three triangular structures from geometric cubes. She wanted the works to provide a space both for climbing and for sitting – that would become “somewhere people can hang out and be” – and for them to adapt and perform a function for all generations. “The end goal was to have absolute engagement with the audience, and for that audience to range from parents putting their toddlers on it to teenagers working out on it.”

A short walk away in Parsloes Park, Yinka Ilori responded to the commission with The Flamboyance of Flamingos, a design inspired by creative workshops with the local community – not to mention the pink birds that once pecked at the grass. “I’m constantly amazed and inspired by kids,” says the British-Nigerian designer, who has worked on several play spaces in recent years. “They have this incredible capacity to dream and imagine and turn the things around them into a game. It’s an incredible feeling being able to watch how the kids decide to use them.” Like Hein, Ilori embraced design elements that leave room for the imagination – a decision that would have made Møller-Nielsen proud.

In a clever contemporary twist, Shezad Dawood has made the city itself the focus of a recently completed playground in Al Masrah Park, Doha. Inspired by the capital’s architectural and social histories, the Doha Modern Playground features four play objects and a pair of benches based on iconic modernist buildings constructed at the height of Qatar’s modern era. “I see it as an active archive that you can engage with,” says Dawood, explaining that his aim was to create a space for both play and reflection.

“One question that kept coming up was ‘What is this?’,” says Dawood. “Is it a set of public sculptures or is it a playground? I liked it being on the blurry edge of those two things. Because why can’t you have sculpture that’s playful?” As a young artist, he remembers visiting a showing of Piero Manzoni’s work at the Serpentine Gallery in London and feeling disappointed that Base Magica (1961) – a plinth with two footprints on it that urges the viewer to step up and become a living sculpture – had been roped off for insurance reasons.

Today, the line between art and play is often happily hazy, with Carsten Höller’s gigantic slides snaking through galleries and museums (“a slide is a sculpture that you can travel inside”, the artist once said). London’s Tate Modern regularly devotes installation space to playful dreamscapes – most recently, Yayoi Kusama’s obliteration room. Visitors were invited not just to touch the art (in this case, an all-white apartment) but to stick colourful dots over every surface. It’s also reassuring when established sculpture parks aren’t afraid to embrace play – take Niki de Saint Phalle’s psychedelic Tuscan world, where crowds are still permitted to climb on, in and around the creations. In the late ’60s, Saint Phalle caused a stir when she created a line of inflatable Nanas (her signature sculpture) to sell as pool toys: “Whether or not people think it’s art – or whether or not it is art – doesn’t matter to me,” she quipped.

Bringing art out of museums and onto the street isn’t easy, as Isamu Noguchi learned when he approached New York City parks commissioner Robert Moses with a proposal for a transformative children’s playground in 1934. Free from walls and equipment, Play Mountain would encourage children to run and slide along modulations that the Japanese-American sculptor intended to carve into the ground. Even back then, his radical design was rejected on the basis that it failed to meet health and safety standards. (Thankfully, his belief that play could lead to a new appreciation of sculpture came to fruition in other pieces, most notably Slide Mantra – a black marble version is in Oo-Dori Park, Sapporo, Japan, and a white one in Bayfront Park in Miami, Florida.)

Like art, play is threatened by cuts. Last year in the UK, the Association of Play Industries (API) reported that, since 2014, 347 playgrounds have shut across England. A lack of funding from central government and reduced local authority budgets make it difficult to maintain equipment. The API is campaigning for investments, communities are crowdfunding and philanthropists are stepping in. Similar challenges are happening the world over. 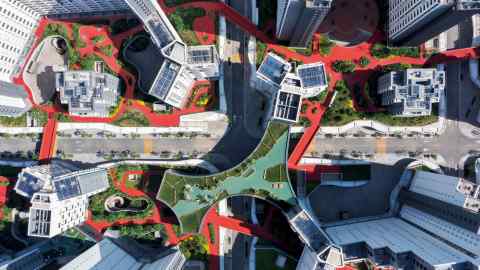 In the US, Rochelle Riley, director of Detroit’s Office of Arts and Culture, has taken matters into her own hands: “The greatest job that folks like me have right now is to help the citizenry understand that, if government isn’t doing enough to make sure that children have a place to play, we must step in and do it ourselves.” Together with Library Street Collective (the gallery founded by JJ and Anthony Curis) and the non-profit organisation Jefferson East Inc, she has been working on a new cultural hub on Detroit’s East Side. Due to open next spring, the campus comprises a sculpture garden in honour of the late artist Charles McGee and a skatepark by Tony Hawk and artist McArthur Binion. As part of its fundraising, the gallery held a benefit exhibition in September (jeffersoneast.org).

For Riley, the artists and the philanthropists supporting these missions, there’s no question that art should be an integral part of the urban landscape, and not just because every child deserves to have access to it for free. Marry art and play and you have a unique opportunity to reinvigorate rundown areas and bring together communities. These spaces encourage us to slow down, to engage with the environment and with each other, to collaborate and come up with fresh ideas. “To have contributed to that is really exciting,” says Rothschild. “Increasing interaction with the physical world is the goal for any artist.”

The 10 most baffling Oscar wins

Body of Orange County lawyer back in U.S. from Mexico,…

I miss my wife every day, but knowing she died with dignity…