As the holiday season rapidly approaches in the US, travelers who have not seen their families in months – and in some cases, years – face pricey plane trips and unexpected cancellations as airlines demand their employees get vaccinated.

What’s more, in addition to the astronomical airfares, unexpected cancellations and shocking wait times, travelers who elect to cross the states by car will have to deal with far higher gas prices than usual.

Both American Airlines and JetBlue issued mandates this month requiring their employees get the jab before the holidays.

The airlines have demanded their staff get their second shot of the COVID vaccine by November 24 – the day before Thanksgiving.

Any staff who’ve refused could walk out or face the ax on the busiest travel day in the American calendar, triggering a flood of flight cancelations due to a sudden shortage of staff.

If a meltdown like that happens, flights that do end up taking off will see ticket prices soar even higher than normal for the pricey time of year as travelers whose planes have been canceled push up prices for other flights that remain scheduled. 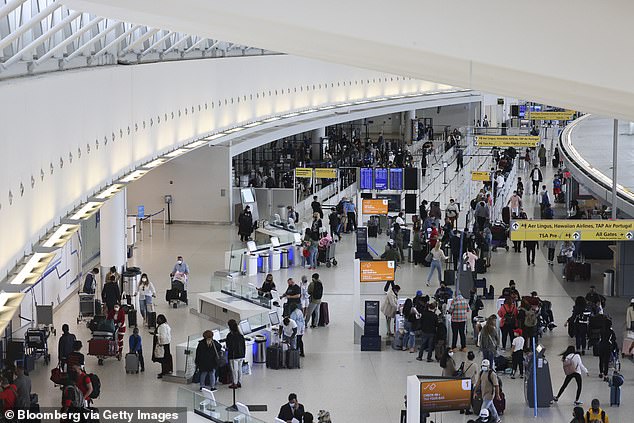 With COVID-19 travel restrictions relaxed from last year, record numbers of people are expected to hit airports in the coming months to travel to visit family they likely have not seen since the start of the pandemic

JetBlue have 22,000 staff, but have not said how many of their staff have had the shot. American – the world’s biggest airline – has 133,000 staff, and has also yet to disclose figures on how many of its workers are still to be vaccinated.

The average price for a US Thanksgiving flight is up 13 percent from 2019 – and a shocking 37 percent from last year.

U.S. carriers’ 2020 net losses after the pandemic were in the billions, according to analyst estimates provided by the software company FactSet – and airlines are still projected to have lost more than $200 billion through next year.

Anyone hoping to save money by traveling by car is also in for a nasty shock, with  national average gas prices soaring by 50.75 per cent in a year.

A gallon of gas now costs $3.288, up $1.107 from the same time last year. The rocketing price increase has been blamed on a spike in the cost of crude oil, as demand bounces back quickly as the world reopens post-COVID.

Economists predict prices are set to rise for an extended period of time, meaning there’s little hope of any respite for Thanksgiving.

However, with COVID-19 travel restrictions relaxed from last year, record numbers of travelers are expected to traverse the country in the coming months to visit family they likely have not seen since the start of the pandemic. 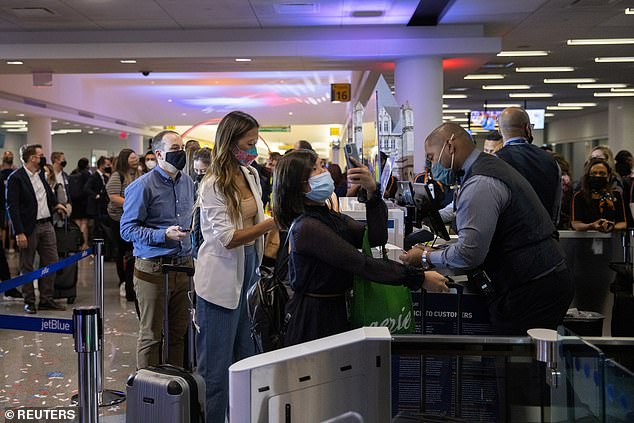 ‘Expect airports and flights to be more packed than ever around Thanksgiving and Christmas,’ Narendra Khatri, a travel insurance company executive, told The Washington Post last month. ‘This means more flight delays, cancellations and long layovers.’ 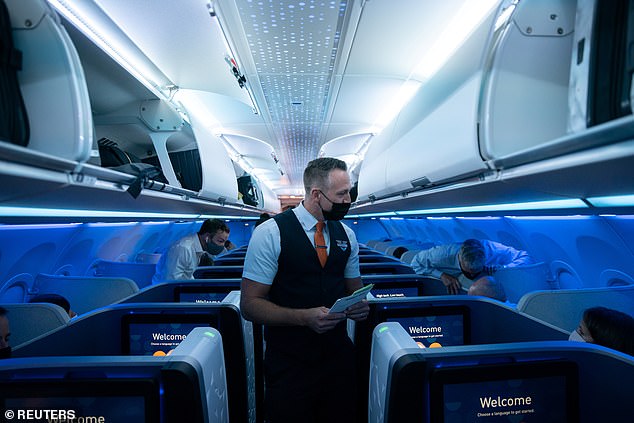 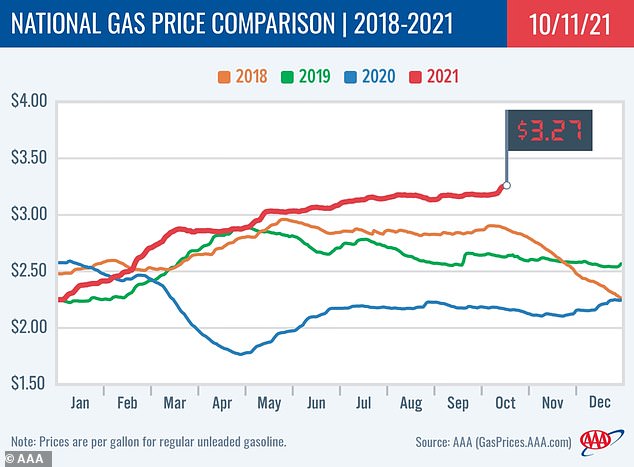 This AAA chart shows how gas prices have rocketed this year, with holiday motorists set to face a hard time at the pumps

‘We’re seeing a lot of pent-up demand,’ Ankit Gupta, vice president of network planning and scheduling for another major airline, United, said in a statement.

The airline announced last month that holiday flight searches on their website are up 16 percent on their site compared to 2019.

Meanwhile, interest in domestic flights for the Thanksgiving season is up a whopping 111 percent over last year, according to the travel site Trip Actions.

‘Expect airports and flights to be more packed than ever around Thanksgiving and Christmas,’ Narendra Khatri, a travel insurance company executive, told The Washington Post last month.

And prices are up too – across all of the major airlines. 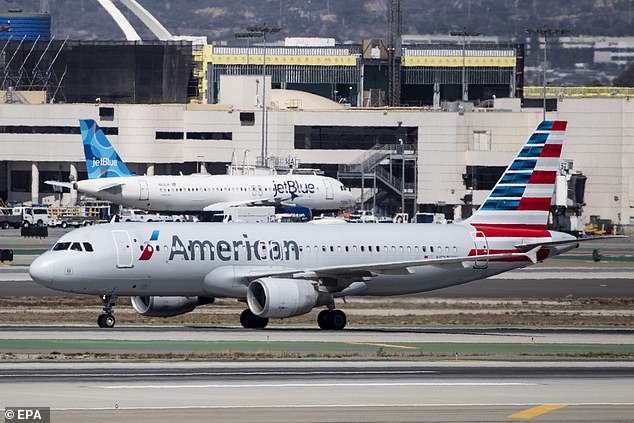 The airlines’ ultimatum comes after President Joe Biden’s executive order last month  requiring all airline employees be vaccinated by December 8 – and the two companies now join an assortment of other carriers who have complied with the White House’s demand.

Columbus Day weekend already saw an unprecedented stream of delays for another major airline, Southwest, when more than 2,300 flights were suddenly canceled over the course of the holiday weekend, amid rumors that hordes of pilots objecting to Biden’s mandate called out sick in protest.

Both the airline and its pilots union have denied those sick-out claims, although Southwest has suffered many times more cancelations in recent days than any other US airline.

The head of Southwest’s pilots union, Capt. Casey Murray, blamed the company’s management for the snafu.

Southwest has already been hampered by staffing shortages as demand for travel has shot up after travel laws lessened. 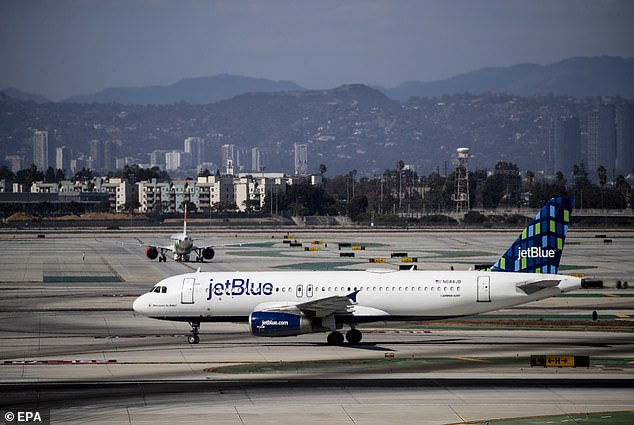 According to government statistics, the airline has lost more than 8,000 employees since the pandemic started in The States as of August 2021.

There may also be unexpected COVID-related restrictions or outbreaks at travelers’ destinations – especially for international travelers – that may cause last minute cancellations.

An influx of reservations for vacation rentals also suggests holiday travel rates in the coming months will be at an all-time high.

Domestic reservation volume for the months of November and December is up 377 percent from last year, in the thick of the pandemic, and 91 percent from 2019, according to short-term rental property management platform Guesty.

For Thanksgiving, the average rental rate is $415 per night, a price hike of 19 percent from last year.

Meanwhile, the nation’s foremost infectious disease expert, Dr. Anthony Fauci has reluctantly supported the prospect of Thanksgiving travel, but warned fliers not let their guard down over the holidays, saying infections ‘can bounce back.’

Americans traveling by land should expect similar pitfalls as well.

Gas prices are higher than they’ve been in seven years – more than $1 a gallon more than last Thanksgiving.

Moreover, drivers in some California counties are paying more than $5 a gallon.

And while more people are anxious to travel, the nationwide COVID death toll has just surpassed 700,000 – with an additional 1,700 Americans dying every day from the virus, and thousands of vaccinated citizens succumbing to ‘breakthrough infections’ – a COVID case that occurs in someone who is fully vaccinated.

Simone Biles Says Younger Self Wouldn’t Have Prioritized Her Health

Who Is Black Adam? Everything to Know About the Rock’s Antihero Movie

Opinion | The Case for File Cabinets

Canadian pastor defiant as judge orders him to parrot…

Enjoying a Jump Into Fall

Trudeau will name new cabinet on Oct. 26 ahead of Parliament…

LinkedIn is closing in China and launching a site with no…