A young woman who was left frightened by the empty supermarket shelves she witnessed during the pandemic has stocked up on enough food to last for five years.

Gubba, who lives just outside of Seattle, Washington, has filled her pantry with hoards of home-grown fruit and vegetables, canned items, rice and pasta.

The content creator, 23, decided to become self-sufficient after witnessing people ‘fighting for food’ during the coronavirus pandemic.

Gubba, who only goes by her first name, says that she is prepared for the worst should disaster strike, with some of her reserves set to last for up to 30 years.

A woman who was left terrified by empty food shelves during the pandemic has now filled her pantry with hoards of home-grown fruit and vegetables, canned items, rice and pasta 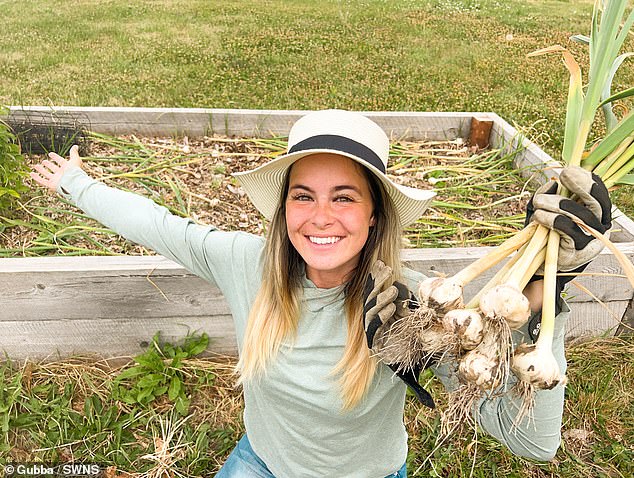 Content creator Gubba, who lives near Seattle, Washington, decided to become self-sufficient after witnessing people ‘fighting for food’ during the coronavirus pandemic

Short term: Fresh fruit and vegetables alongside canned goods used every day such as peanut butter

Long term: Pasta, beans and rice in bags along with her own canned items and ‘ten-pound’ cans

Gubba first moved from the city in 2021 after buying a 1970’s farmhouse on 38 acres of land where she has been growing her homestead ever since.

It was there that she taught herself how to grow fresh fruit and vegetables as well as how to preserve them using techniques such as freeze-drying and canning.

Speaking about her preparations, Gubba, who lives with her five Shepard dogs, said: ‘The food I have now will last me five years.

‘Before I was living in the city and lived on supermarket food.

‘In the pandemic, I saw the empty shelves and saw people fighting for food and wanted to be self-sufficient.

‘I started reading gardening books and grew a tiny little garden. Now I am mostly self-sufficient. I didn’t know how to can or grow food but now I can.’

The homesteader also has a flock of 13 chickens, fruit trees, and grows vegetables such as garlic, tomatoes, varieties of lettuces and cucumber.

‘And I grow raspberries, blackberries and blueberries.

‘They are great to make jams, pie fillings or even just for freezing to use later in a smoothie.

‘I grow a wide variety of vegetables. I make my tomatoes and peppers into salsas and if you can them, they can last 10 years or more.’

Gubba uses a three-layered system for her food storage – her pantry has all the everyday food she makes her regular meals with such as the fresh produce and canned goods. 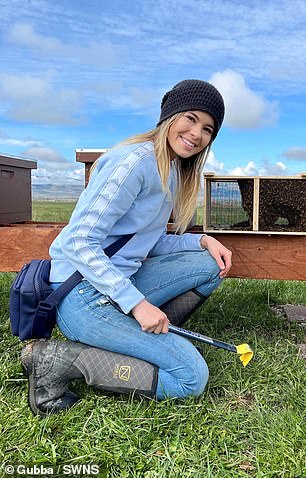 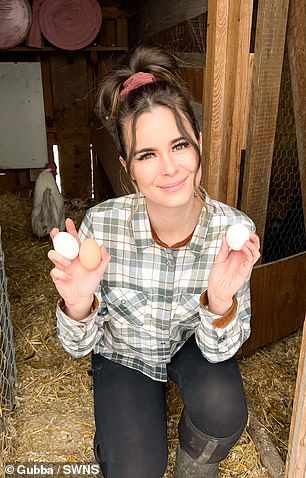 The 23-year-old (pictured with her bees, left, and with her chickens, right) taught herself how to grow fresh fruit and vegetables after moving to the homestead 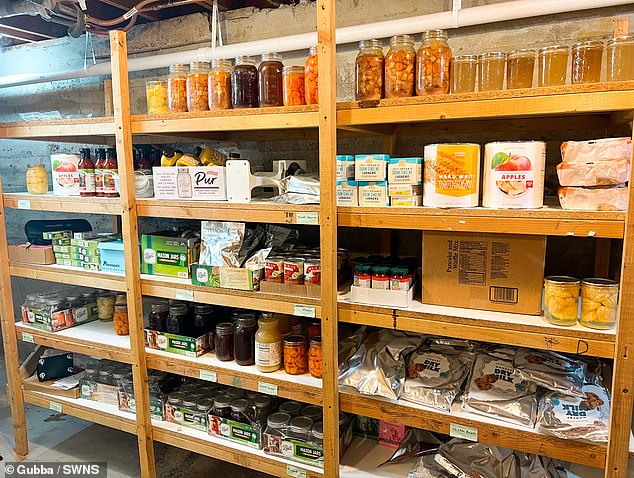 Gubba, who only goes by her first name, says that some of her goods (pictured) will last for up to 30 years if disaster were to strike 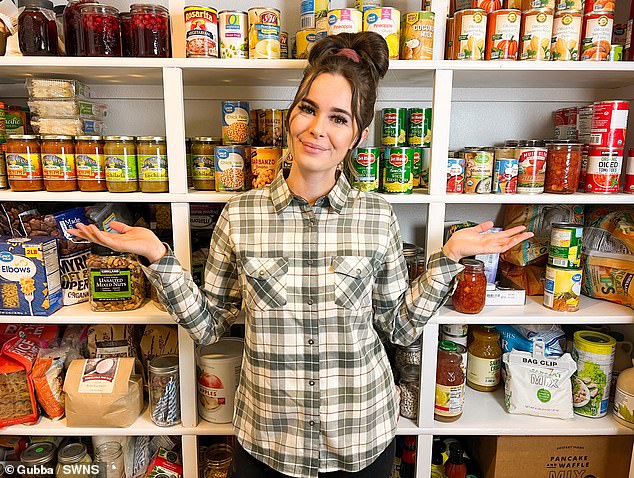 Gubba, who bought the farmhouse last year, uses a three-layered system for her food storage

In her middle layer, she keeps her boxed and freeze-dried goods and her long-term storage area is home to pasta and her own canned items.

‘I keep pasta in Mylar bags with oxygen absorbers. They can last up to 20 years,’ Gubba said.

‘Freeze dried items can last up to 30 years and be just as fresh as when they were frozen.

‘Freeze drying takes all the moisture out of the food, so you just have to rehydrate it.’

She runs her own YouTube channel, which has more than 8,000 followers, where she gives viewers tips on how to be more self-sufficient as well as the best ways to prep for disaster – whether it be a hurricane, a flood or another pandemic.

‘Everyone can have a food storage,’ she said.

‘You can keep food under your bed. I have plenty of food for myself and my neighbors. I am ready for any situation.’

Writing on her blog, titled Gubba Homestead, the Doomsday prepper stressed the importance of being prepared: ‘I believe everyone should have a food storage because it is a way to safeguard yourself from the unknown circumstances of life and the unforeseen events of the world…

‘No matter how many global emergency situations [people] endure, they still insist on the mentality of the grocery store being their safeguard. No entity, program, or grocery store is your safeguard — YOU are your only safeguard!

‘Stop depending on outside sources to care for you, this is a failure mindset. Do you want to be out fighting the crowds next time a disaster rolls around?’

She added: ‘You can prepare in such a way that you can thrive, not just survive, in disaster scenarios.

‘Can you feed your family and be self-sufficient in a scenario where the grocery stores are wiped clean for the unforeseeable future? If you can’t, start prepping now.’

I Drove to One of the Least Popular US National Parks, Worth…

27 TONS of charcuterie meat recalled over fears they are…