Sometimes, as I cycle through Edinburgh, I have to remind myself I am not actually riding smack through the middle of the world’s most fantastical opera set.

Because Edinburgh is not just one of the world’s most beautiful cities, it is the closest you can get to grand opera without setting foot inside a theatre.

I took to the city immediately when I arrived to study law in 1965.

The towering buildings, the fascinating skyline, the spikes and the spires: but this great city is about so much more.

It also has a rich history of culture, mystery and intrigue.

I was brought up in what is now Zimbabwe, but we’ve had four generations going through Edinburgh Medical School — my grandfather, my wife’s father, my wife and then my daughter.

Every city in the world has its own special day, and for us in Edinburgh it’s Hogmanay on December 31. But we don’t just celebrate with a single night — the whole month of December is dedicated to it. Our grandest road, George Street, is festooned with street lights. 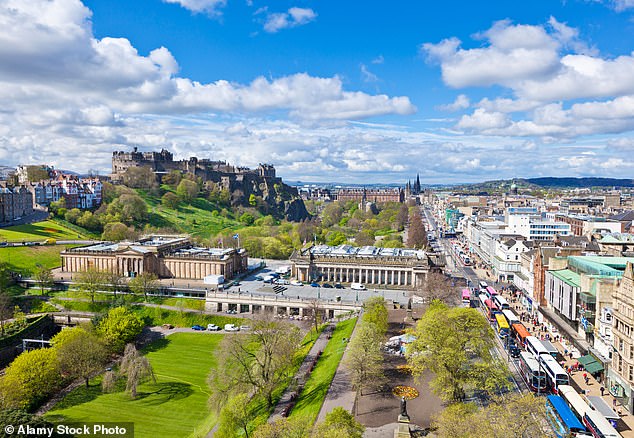 Rock of ages: Edinburgh Castle looms over Princes Street. Alexander writes: ‘Sometimes, as I cycle through Edinburgh, I have to remind myself I am not actually riding smack through the middle of the world’s most fantastical opera set’ 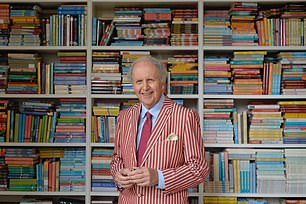 Roads are closed and the entire length evolves into a 500m bar. In St Andrew Square, at the head of George Street, there’s usually an ice-rink; it looks glorious but it’s not for me.

Just down the road, the Princes Street Gardens are turned into a fairground, with rides for the children, mulled wine for the adults, and a Christmas market selling strange hats and beguiling wind chimes.

The best view of all this revelry is from the castle at the top of the hill.

The climax of Hogmanay is the Castle fireworks at midnight — though a lot of the First Footers won’t be home before dawn.

The Castle is the hub of the oldest part of the city, the Old Town.

It’s all higgledy-piggledy with no overall concept. I’ve always been fascinated by the Old Town’s history of crime and murders. The infamous burglar Deacon Brodie used to lurk here. He was the inspiration for Robert Louis Stevenson’s Strange Case Of Dr Jekyll And Mr Hyde.

Running through the middle of the Old Town, from the Castle to the Palace of Holyroodhouse, is the Royal Mile, which is actually just over a mile. 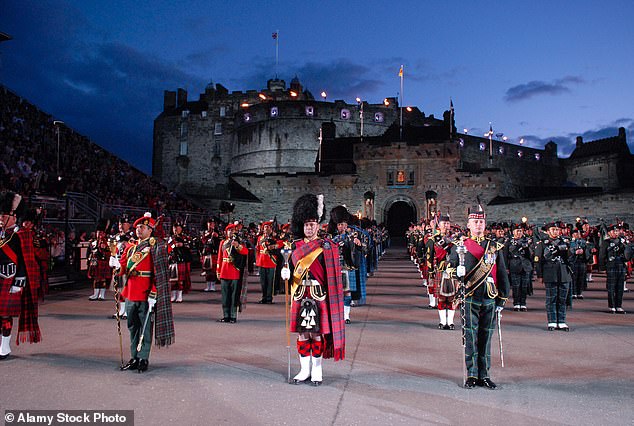 Alexander McCall Smith’s latest book, The Enigma Of Garlic, has just been published by Polygon, an imprint of Birlinn. It is the 16th book in the 44 Scotland Street series. Pictured is the Edinburgh Military Tattoo

Forever Edinburgh is offering Mail readers the chance to win a literary-themed trip for two to Edinburgh to meet Alexander McCall Smith, including return travel, two nights at the 5-star Balmoral Hotel, afternoon tea with Alexander at the Signet Library, meals at Superico, The Printing Press and Badger & Co, plus literary experiences including the Edinburgh Literary Pub Tour, the Writers’ Museum and the Scott Monument. To enter, visit edinburgh.org/alexander-mccall-smith-prize. For more information about Edinburgh, visit edinburgh.org.

That’s where you will find Holyrood. It’s the site of what for me is one of our greatest unsolved mysteries; for it was here in 1545 that Mary Queen of Scots’ husband Lord Darnley was literally blown to bits.

As to the culprits and their motives, it’s anyone’s guess.

The Old Town, with its tenements and tight-knit buildings, gradually merges into the New Town, so beloved by film-makers who want to recreate the architecture of the past.

A stroll through the New Town is a museum trip in itself, past beautiful regularly proportioned Georgian houses. Between 1810 and 1840, under Georges III and IV, the city fathers commissioned leading architects to lay out new suburbs to ease overcrowding. The chosen style was the fashionable neo-classical, leading Edinburgh to be dubbed the ‘Athens of the North’ and latterly, ‘Auld Greekie’.

I live in Edinburgh’s Southside. From the Castle, head south away from the New Town and you will come to Marchmont, Merchiston and indeed Morningside — made famous by Muriel Spark’s Miss Jean Brodie.

Stevenson was disparaging about the Southside, saying that it was over-run with little villas — but our little villas soon merge into the Pentland Hills and the Borders.

Edinburgh was a much quieter city when I first came up. Now it seems as if every second door is a restaurant or a bar or yet another café.

The university used to be marvellously atmospheric, but a lot of its architecture has disappeared. It destroyed two sides of George Square to create buildings of awful banality. The city had several narrow escapes — the narrowest of which was a plan to carve a motorway right through the Princes Street Gardens, complete with multi-storey car park and pedestrian walkway.

Glasgow was not nearly so lucky and it was cut in half by the M8. I started a PhD at Edinburgh and did that for a couple of years, before I got my first academic job at Queen’s University in Belfast.

Edinburgh has seven hills and I love them all. The Salisbury Crags are the site of one of the pivotal moments in scientific history. I walk here and I think of James Hutton, the father of geology, who developed his theory that our earth was formed over millions of years while roaming the Crags

When I flew back to Edinburgh, I was always struck by the beauty of the city, the farmland so neat, the buildings so ordered, everything so green and verdant. When you come in over the Firth of Forth, you immediately see the three bridges — three different centuries of bridge construction right there in front of you.

Presiding over us is this great extinct volcano, the 251m Arthur’s Seat.

When you’re up there you could be in the countryside. There are lots of theories about the hill’s name, including that it derives from the Gaelic for ‘Height of Arrows’; the one thing it has nothing to do with is King Arthur.

Edinburgh has seven hills and I love them all. The Salisbury Crags are the site of one of the pivotal moments in scientific history. I walk here and I think of James Hutton, the father of geology, who developed his theory that our earth was formed over millions of years while roaming the Crags.

I love touring Edinburgh’s cycle-tracks on my electric bike. If you’re a visitor, then get hold of a bike: you have great delights ahead of you. My favourite ride is out to Dalmeny and South Queensferry, where you’re in the middle of the country.

I also like the Water of Leith with its statues by Antony Gormley as it trickles from Balerno to Leith. I sit on a bench with a friend and we eat pies together.

I think most frequently of Stevenson when I cycle past his old home on Heriot Row in the New Town.

My ‘little villa’ in Merchiston is very different from Stevenson’s grand Georgian townhouse — but it has its charms all the same. Like Edinburgh, it grows on you.

U.S. economy in the third quarter was stronger than initially thought

Opinion | Can medical abortions last in the post-Roe era?

State Farm says it has stopped insuring some Kia, Hyundai…

UK airlines will be forced to ‘use or lose’ airport slots

Life for Love Island’s Tom Clare gets complicated after…

Biden to end COVID-19 emergencies on May 11